An alt-F1 blog that explores the sport and business of Formula 1 + the home of the Inside Line F1 Podcast
Kunal's F1 Blog
Skip to content
Homepage MotoGP 2020 MotoGP: A Summary Of Off-Season Action 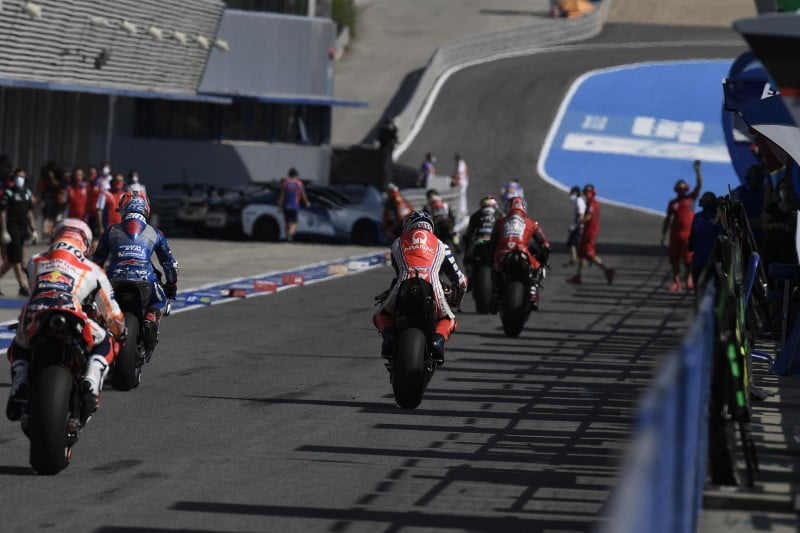 Here’s a 2020 MotoGP season summary – all the stories you missed during the long off-season! The 2020 MotoGP season is special in so many ways – it is a season like no other, and hopefully, this spirit will translate into unprecedented on-track action as well.

When we bid adieu to MotoGP in November 2019 at Valencia, none of us would have imagined that we would have to wait an excruciatingly long 243 days (or exactly 8 months) for the next race day. The COVID-19 pandemic has wreaked havoc globally, and MotoGP has been no exception. Days before the season opener in Qatar, the premier class race was cancelled. Thereafter, it was a string of cancelled races and sheer uncertainty – until Dorna confirmed that the 2020 season would resume with the Spanish MotoGP at Jerez, slated for this weekend.

Even as we all rejoice at the fact that the action resumes, it is far from ‘business as usual’ for the series. Like all other global sports, MotoGP has adapted to a new normal mode of functioning, which allows the show to go on – but in a strategic and safe manner. Dorna CEO Carmelo Ezpeleta has emphasised that even in this new situation, the series would not want to compromise on-track competitiveness – which has been a hallmark of MotoGP.

Originally, Dorna had planned the 2020 season to have 20 rounds – playing on the catchy catchphrase of ‘20 races in 2020.’ However, the modified calendar for this season is far more conservative – presently featuring 13 confirmed rounds in Europe, of which 7 will happen in Spain. Back-to-back races are planned at Jerez, Spielberg, Misano, Aragon and Valencia. Four flyaway races outside Europe are potentially planned for the end of the year. This highly condensed calendar poses unique challenges to the teams – they will have limited time to regroup between rounds. It remains to be seen whether this differently impacts the larger teams (with access to greater resources) as compared to the others. Japanese manufacturers have also been concerned about mobility of staff to the races, given travel restrictions in light of the pandemic.

Perhaps the biggest challenge for riders is the fact that most have been unable to ride for the past eight months – probably the longest break in their careers so far. To level the playing field, the Grand Prix Commission ruled in May that riders would not be permitted to undertake private testing or track days on MotoGP bikes or bikes with comparable specifications. Accordingly, riders were forced to seek other options – such as Alex Rins and Johann Zarco who trained on roadgoing specification superbikes. This brings us to the question that must be pondered: how will this long period of inaction impact riders and their form factor? Riders will need to rebuild their momentum from scratch. The other point to note is that while the rusty form may lead to more incidents and injuries, riders will have less time to recover between rounds thanks to the cramped calendar.

There are also longer term implications of the pandemic on the series. The Grand Prix Commission announced that all stakeholders had unanimously agreed to an engine and aero package freeze for 2020 and 2021. The release by the Commission revealed that “these changes are designed to reduce the costs incurred by the ongoing COVID-19 crisis whilst maintaining fairness and equality in order to conserve the entertainment value of the sport and the integrity of the competition.”

Despite the lack of on-track action in these past months, MotoGP has seen a flurry of activity thanks to off-track announcements.

Let’s first talk about the massive shuffle at the Honda stable. Last season closed with two noteworthy updates from the Honda camp – first, that multiple-times World Champion Jorge Lorenzo would retire, and that his seat would be filled by reigning Moto2 champion Alex Marquez. This meant that brothers Marc and Alex would be teammates at the factory Repsol Honda team. It was a blockbuster promotion for Alex – but unfortunately, his joy was short-lived. After months of speculation, Honda Corporation confirmed that KTM rider Pol Espargaro would ride for Repsol Honda in 2021 and 2022, alongside Marc Marquez. Espargaro, in his seventh MotoGP season, is well regarded in the paddock as a talented team player with a clean riding style and strong developmental abilities. These traits will help him support Marquez and the team, while also bringing stability to the second factory seat.

Oh how much we’ve missed this! 🤩#MotoGP roared back into life this morning as we count down to the #SpanishGP! ⏱️#JerezTest pic.twitter.com/7LW2hgfJwN

It seems ruthless that Alex Marquez was booted out to the satellite team without the rookie having the opportunity to ride a single lap this season – but there is more than what meets the eye. Alex was signed up by the team under unprecedented circumstances in 2019, as Lorenzo shockingly retired after reneging on his two year contract with the team. Other competitive riders were already locked up with a 2020 contract, so Honda’s options were limited. Moreover, although Alex Marquez is yet to ride in a MotoGP race, he has completed over ten days of testing earlier this year. It is possible that the Honda bosses opined that the rookie needs to acclimate to the premier class at the satellite LCR Honda team, before moving (back) to the coveted factory seat. Alex Marquez’s move to LCR Honda means that veteren rider Cal Crutchlow is left without a ride for 2021. Dorna CEO Ezpeleta has said he will help Crutchlow find a seat – and all indications point to a ride with Aprilia, if he is to remain in the series.

2021 will bring a rider change for the Ducati factory team with the signing of Jack Miller from Pramac Ducati. It is a “dream come true” for the young Aussie rider. He exclaimed, “This is, pretty much, what I’ve been working towards my whole life. To sign with a factory and be a fully-fledged factory rider is something you put in your mind as a long-term goal… To be there, it’s so exciting and a little bit unreal in some ways, but shows you that all the hard work and sacrifices everyone who has helped me to get there were worth it.” The fine print to keep in mind is that Miller has only secured a one year contract with the Ducati factory team – and an extension will be closely linked to his performance.

Miller’s move to the factory team meant that Danilo Petrucci received the boot. Despite recording a win in 2019, Petrucci’s overall season was lacklustre in comparison to teammate Andrea Dovizioso. For Ducati to consistently challenge the dominance of the Marquez-Honda partnership, they need a strong rider pairing. Hopefully, Dovizioso’s experience and Miller’s raw talent will provide exactly that. Meanwhile, Petrucci confirmed a move to the KTM Tech 3 Team – and surprisingly, not the factory KTM team. It is a little strange that the race-winning rider has been overlooked for a factory drive by KTM in favour of Miguel Oliveira and Brad Binder, two relative newbies. KTM may have the most inexperienced pairing on the grid, but betting on younger talent is the motorsport mantra these days.

The @Michelin @MotoGP Team is thrilled to officially restart the 2020 season this week. After a long wait, our MICHELIN Power are more than ready to set new records.

The other news from Ducati is that the team has been unable to close Dovizioso’s contract for 2021 and after – with news emerging that the parties had reached a stalemate due to financial disagreements. It now seems to have become a situation of who blinks first – with Dovizio’s manager throwing in the possibility of a sabbatical, while rumours persisted around whether Ducati could reach out to their former rider Jorge Lorenzo. The question that begs to be asked is – how will this uncertainty and power politics impact the team’s dynamics in the 2020 season?

The 2020 MotoGP season is special in so many ways – it is a season like no other, and hopefully, this spirit will translate into unprecedented on-track action as well.

The MotoGP action will begin on 18 July, Saturday from 4 PM (IST) with the qualifying race followed by the main race on Sunday, 19 July, live on Eurosport and Eurosport HD.