Mercedes Do What Ferrari & Red Bull Didn't In Their Dominant Era 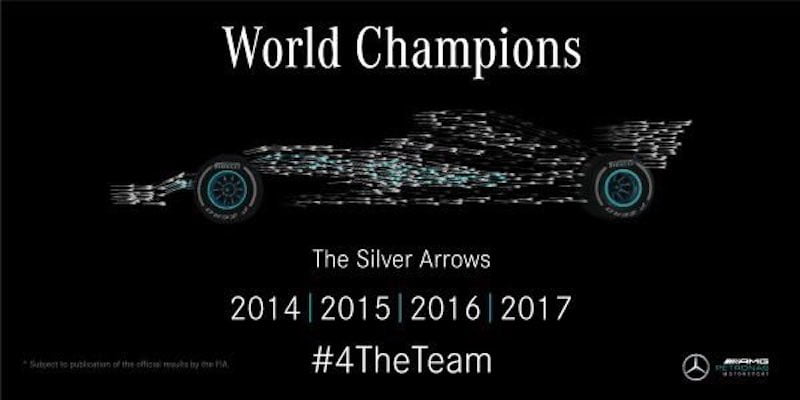 Formula 1 and its fans hate dominant eras. But there’s little one can do when regulations sometimes allow for such dominance. Okay, I didn’t mean sometimes, I meant most of the times. However, Mercedes need to be thanked for not making their era of dominance. Unlike Ferrari and Red Bull Racing, they allowed their drivers to race – something we need to applaud them for!
At the 2017 United States Grand Prix, Mercedes pipped arch-rivals Ferrari and Red Bull Racing to clinch their fourth consecutive Formula 1 Constructors’ Championship.
With this, one can officially conclude that 2014 to 2017 has been the Mercedes era in Formula 1, much like the Red Bull Racing era in 2010-13 and the Ferrari era in 2000-04. While such eras are great for the winning teams, they’re absolutely boring for the fans and detrimental to the sport’s growth. In 2018, let us hope there are multiple teams battling with Mercedes for top honours. But for now, it’s time to celebrate Mercedes’ achievement.

On the Formula 1 grid, Mercedes are as iconic a brand as Ferrari is. But for some reason, while they’ve managed to win multiple world championships, they’ve not managed to emotionally enchant fans like Ferrari have managed through the years. The German manufacturer’s first involvement in Formula 1 was in the 1950s. Juan Manual Fangio, who got even more famous when Michael Schumacher beat his record of five Drivers’ Championships in the 2000s, won two of his five titles with Mercedes. It took a freak accident that killed their racer Pierre Levegh and 80 spectators at the 24 Hours of Le Mans for Mercedes to pull out from all forms of motorsport.
In the mid-90s, Mercedes returned to Formula 1 as an engine supplier to McLaren. In fact, those who grew up watching Formula 1 in that era would remember that the McLaren-Mercedes cars were known as the ‘Silver Arrows’ back then. The McLaren-Mercedes partnership won a Constructors’ Championship (1998) and three Drivers’ Championships (1998, 1999 and 2008). It was only in 2009, after Mercedes won both the championships with debutant team Brawn, that they decided to go from being an engine supplier to a full-works team from 2010. For Formula 1, this commitment from Mercedes came in a year when Toyota and BMW had decided to end their association with the sport.

Give Everyone Mercedes Engines!

Ross Brawn, the architect of the Ferrari-Michael Schumacher era in the mid-2000s, found himself as the Team Principal of the newly-formed Mercedes F1 Team. The Brawn-Mercedes combination tempted Michael Schumacher to come out of retirement; he raced for the team from 2010-12 before Lewis Hamilton switched from McLaren-Mercedes to the works Mercedes team in 2013. It was Brawn’s long-term vision and planning that saw Mercedes dominate Formula 1 once the new power unit regulations kicked-in from 2014.
Given the complicated nature of the hybrid turbo power units, it would be safe to assume that the current era is the toughest era in Formula 1. A look at Honda’s struggles only makes Mercedes’ domination story that much more impressive. Since 2014, Mercedes have scored a staggering 62 wins out of 76 races (a win percentage of 81.5) and have been on the pole 69 times.
Till 2017, their domination has been such that the chance for a rival team to score a win was only when either Mercedes car had a problem or if both drivers crashed out—like they did at the 2016 Spanish Grand Prix—or when Formula 1 went racing in Singapore!
In 2017, the new aero regulations were expected to shake up the order and allow other teams to catch up and threaten Mercedes’ dominance. While Ferrari and Red Bull Racing have been far closer to Mercedes than ever before, there have been only a handful of races where the Mercedes car hasn’t been the class of the field.

Ricciardo To Choose Who To Play Second Fiddle To: Hamilton, Vettel or Verstappen?

It took Ferrari three seasons (2017) to catch up with Mercedes on the power unit front while Renault and Honda are still playing catch up. Mercedes’ dominant ways continued even after Williams asked for their Technical Director Paddy Lowe in exchange for Valtteri Bottas at the start of the season.
‘You are only as fast as your car is’, is a good quote to summarise the importance of a quick car in Formula 1. Unless you are Fernando Alonso! Nico Rosberg clinched his maiden Drivers’ Championship and Lewis Hamilton clinched his second and third titles by making the most of Mercedes’ superior machines. While Rosberg retired after winning his first title last year, Hamilton is on course to win his fourth title this weekend in Mexico, unless something dramatic happens.

Lewis Hamilton’s career skyrocketed after making a surprise but smart switch to Mercedes from McLaren in 2013. As McLaren went lower in the Constructors’ Championships thanks to Honda’s power units, Mercedes went from strength to strength and this allowed Hamilton to equal and beat some of the most important records in Formula 1. At the 2017 Italian Grand Prix, Hamilton broke Michael Schumacher’s record of 68 pole positions.
While we’re not fans of dominant eras in Formula 1, we must applaud Mercedes for playing fair with their drivers, something that Red Bull Racing and Ferrari have seldom had the guts to do so. In the Rosberg-Hamilton era and now even in the Bottas-Hamilton era, Mercedes have given a fair chance to both their drivers to win races and fight for the Drivers’ Championships. Had they not done so, Formula 1 would’ve been a far boring sport in the last few seasons than it actually was!