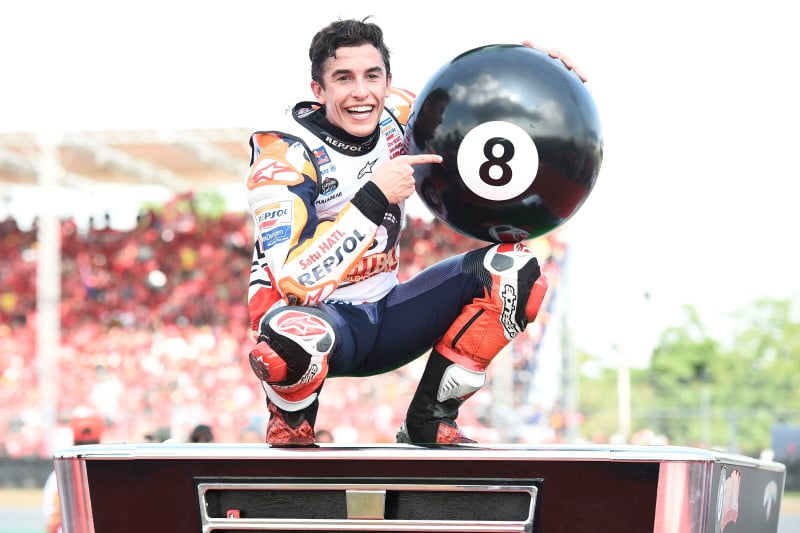 When Marc Marquez clinched his sixth MotoGP premier class title in Thailand, the world of sport absolutely erupted with excitement. The Repsol Honda rider has pulled off a near-perfect season to claim the crown while dominating the rest of the grid and stamping his masterclass all around. Basically, there was never any doubt that he would be world champion once more.

At the start of the 2019 season, Marquez was still recovering from a shoulder surgery conducted in late-2018. Doctors told Marquez to give his recovery four months, but he wanted to bounce back in just a month. As he recounted, “I gave it my all, with my physical preparation too, and those around me helped me. I wanted to get to Qatar in the best possible condition and I think I did that. Hard work always pays off in life.” This grit and determination has been characteristic of Marquez all through his career, and it’s a trait we’ve seen in champions through the ages.

Even as we hail him for his superhuman skills, there were several times throughout the season where Marquez was vulnerable, emotional and painfully human. He saw him frustrated and angry as he lost victory on the last corner of the race – twice. We saw him visibly moved when he denied rookie Fabio Quartararo his maiden win, also twice. And we saw him unleash (unnecessary) aggression during various spats with his fellow riders.

It is this alluring mix of being superhuman yet human that makes Marquez such a great champion. He is great, no doubt, but he’s also real and relatable. He has flaws, he makes mistakes, but yet pulls himself together every time to succeed.

Close field, but not close enough

Let’s take a moment here to appreciate how competitive the MotoGP grid is, unlike Formula 1, where only few have the right car to win, MotoGP is far more equal and open. We have riders from works and satellite teams competing fiercely against each other, something that rarely happens in Formula 1. In fact, Dorna had taken various measures to ensure that the 2019 grid would be tighter than ever.

This context makes Marquez’s feat seem even more impressive. He managed to convert the small performance differences on track into a staggering difference on the point stable. Marquez has won the championship with four races to spare, and currently has about 50 percent more championship points than his closest challenger, Andrea Dovizioso of Ducati. He has amassed nine race wins even as no other rider has more than two wins.

Can Marquez Win The MotoGP Triple Crown For Honda In 2019?

Teammates are usually thought to be the best benchmark of a rider’s performance, since they have similar machinery and setups. However, Marquez’s teammate Jorge Lorenzo has been less of a benchmark and more of a back-marker all season. He has suffered from dismal pace, health issues and an overall inability to get the Honda bike to work for him. Lorenzo is currently languishing in a lowly 19th place in the championship, with a season-best result of only P11. This is a pity really, because we were all looking forward to a battle for supremacy between Lorenzo (himself a five-times champion) and Marquez. In fact, the only year when Marquez participated in the premier class and didn’t win the title (2015) was when Lorenzo triumphed.

The not-so-secret ingredient contributing to Marquez’s success this season has been his consistency. Apart from a solitary retirement at Austin, Marquez has finished every single race in either first or second position. As things stand, 2019 is his most consistent season ever. Of course, four races remain and as Marquez admitted, “Every time I’ve won a title, I’ve crashed in the following race. So that is my first challenge as a champion.”

The other admirable quality that Marquez brings is his ability to adapt and evolve as a rider. After Honda developed a “punchier” bike to compete with Ducati on speed, Marquez was able to “immediately adapt his riding style to take maximum profit from the bike” as per Honda’s Technical Manager Takeo Yokoyama, who went on to describe him as being ‘somebody from another planet’.

Here are only some of his achievements ?

Greatest rider of all time?

Marquez’s six premier class championships come in just seven years, an ode to the greatness of the man. This era of motorbike racing has already become synonymous with Marquez, and every move only seems to raise him up further. Over the years, he has beaten some of the best talents of our times to the title, including Dovizioso for the past three years (2019, 2018 and 2017), Valentino Rossi (2016 and 2014) and Jorge Lorenzo (2013).

Many believe that he is on target to claim the title of being the ‘greatest rider of all time’, which is currently held by Giacomo Agostini, who has 15 titles in total. Agostini’s winning period was from 1966 to 1975, which means that this record is several decades old, and has stood the test of time. Marquez currently has six premier class titles, and a title each from Moto2 and Moto3, bringing him to a total of eight titles. Add to this the fact that he’s only 26-years-old, and he seems to be on the right track and on the right bike.

However, Marquez downplayed this scenario, sharing, “I heard Giacamo (Agostini) talking on the radio and he thinks I can reach 15 titles. To do so, I would practically have to double up on what I’ve already done and I think that’s impossible…or almost impossible. When I decide to retire, I will be very proud of what I’ve done throughout my career.”

While Agostini’s title may be some way off, Marquez is only one title shy of equalising the great Valentino Rossi’s record of nine titles. To this he shared, “I like to live in the present and I’ve never been obsessed with numbers or records. Every era has its names, its champions. For now I’m still on the eight title and we’ll see.”

In a more immediate sense, Marquez’s priority will be to continue winning in the 2020 season. In his own words, he expects rookie Quartararo (riding for SRT Yamaha this season) to be his biggest challenger. Quartararo gave Marquez a run for his money several times in the second half of the season, and consistently shone in qualifying. Will the young rider get a promotion to the works Yamaha team next season? This probable David vs Goliath battle has us licking our lips in anticipation! Let’s also keep an eye on Alex Marquez, Marc’s younger brother, who currently leads the Moto2 championship standings. Can the duo repeat their feat of being the only siblings to win world motorcycle racing titles in the same year? Also, how soon before they have a go at each other in MotoGP? 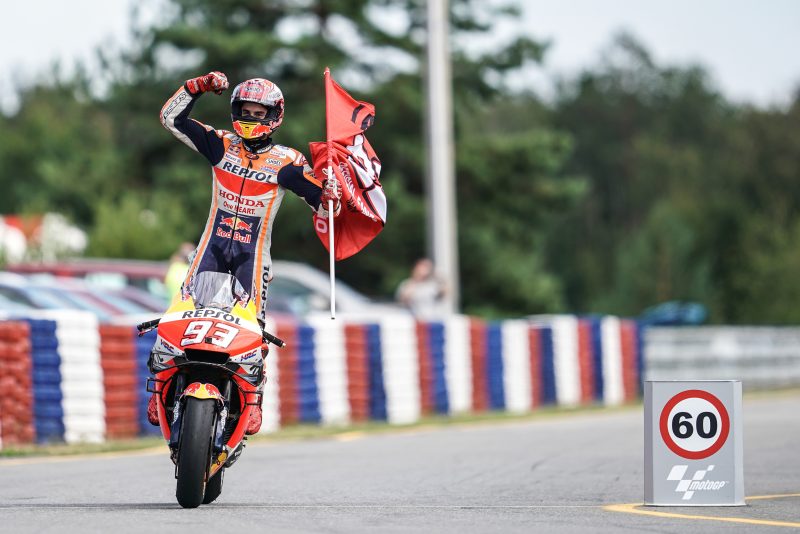 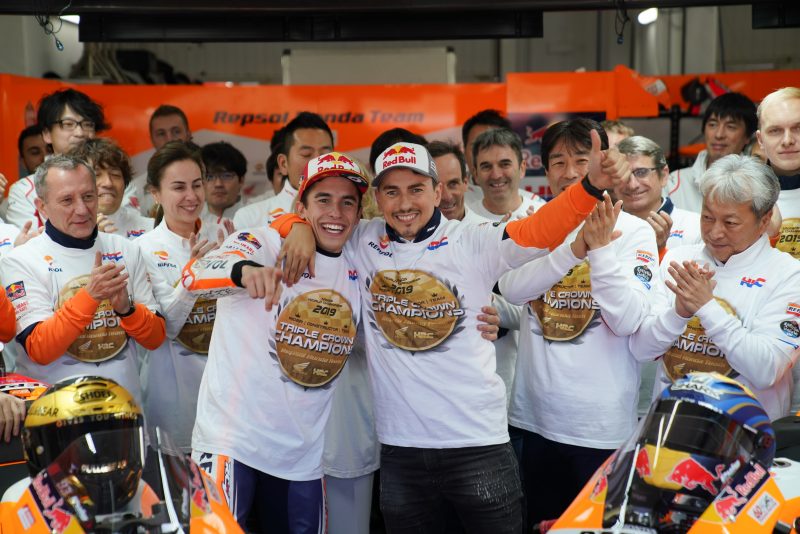 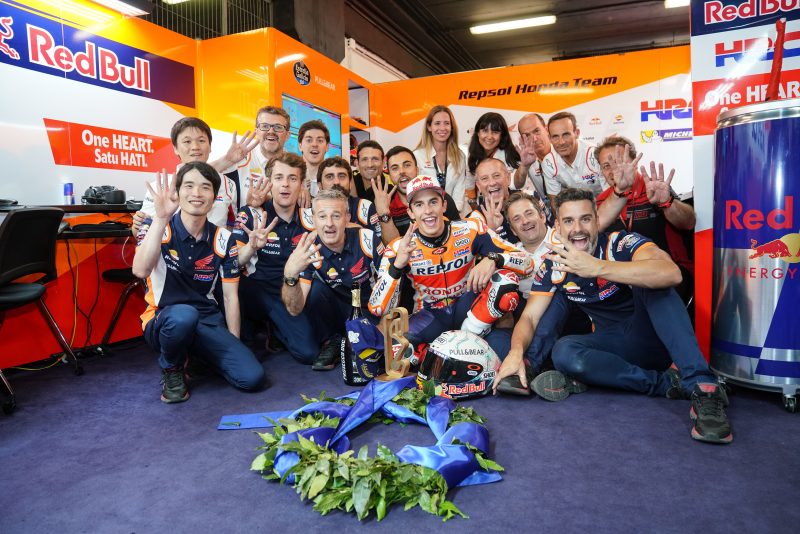