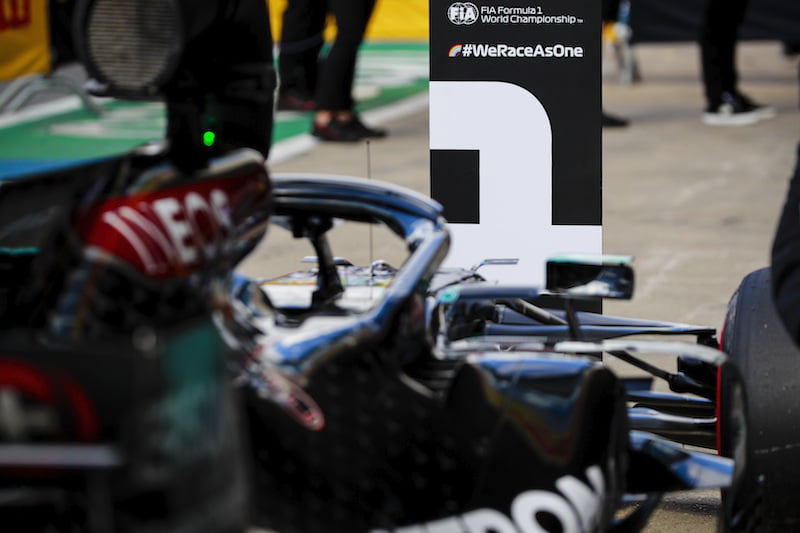 2020 British GP: Lewis Hamilton’s victory on 3 wheels the luckiest of his career yet?

The start and the end of the 2020 British GP was full of drama. The first 13 laps of the race saw two safety car periods – both triggered by dramatic crashes in the mid-field. In the last 3 laps, three of the top-5 drivers suffered from unexpected tyre failures that gave us a surprise finishing order. At the flag, Lewis Hamilton took his seventh victory at Silverstone followed by Max Verstappen and Charles Leclerc.

Hamilton’s 87th career victory was also probably his most-dramatic and luckiest win till date. After leading comfortably from the start and with only half a lap to go of the 52 laps around the Silverstone circuit, Hamilton’s left-front Pirelli tyre gave away – two laps after Valtteri Bottas’ Mercedes suffered a similar fate. While Bottas was forced to pit and finish outside of the points, Hamilton dragged his Mercedes across the finish line with only three working wheels on his wagon to claim a tense victory. The reigning champion was lucky that his tyre issue struck on the last lap and not on the laps prior.

Hamilton said, “I have never experienced anything like that before. That last lap was one of the most challenging laps I have ever had.”

Formula 1’s tyre life graphic which has been subject to much ridicule given it’s not-so-accurate representation in the past actually got it right in Hamilton’s case. The graphic had shown Hamilton’s left-front tyre life at only 10 percent a lap before it gave up. Along with Hamilton and Bottas, Mclaren’s Carlos Sainz Jr. suffered a similar tyre issue a couple of laps to the end. While Bottas stumbled down the order from second place, Sainz did so from fourth place – costing both drivers vital championship points.

Formula 1’s official tyre supplier Pirelli has launched a ‘360 degree’ investigation to find the cause of these embarrassing and unsafe tyre failures at the 2020 British GP. Pirelli’s Mario Isola commented, “We will obviously investigate what happened in the last few laps. It’s a bit early now to give you any conclusion. It could be high wear, because for sure tyres with 38 laps or more on this circuit are quite worn, but I’m not saying that the wear is the cause of the issue. It can be debris, because we had the pieces of the front wing of Kimi (Raikkonen) that were on track, but also some other debris.”

The coming weekend is th second race at Silverstone – called the 70th Anniversary Grand Prix. To spice up on-track action and tyre strategies for this race, Pirelli will bring a set of tyres that is a step softer than the ones used for the 2020 British GP. The Italian tyre manufacturer confirmed that their selection won’t change despite the failures this weekend. This could mean that the upcoming race will be two-stopper, but the teams will exercise more caution when deploying a strategy that would require their drivers to push the tyres closer to the end of their life. And of course, end of tyre life should mean a loss of grip and not an out-and-out blow-out!

Interestingly, drivers were forced to pit for the hard tyre earlier than expected after Daniil Kvyat’s crash brought out the safety car on lap 12. There were seven drivers who made their hard tyre last the remaining 40 laps of the race while Hamilton, Sainz and Bottas’ hard tyre lasted only 39, 38 and 37 laps respectively.

Big crashes, awesome overtakes and one of the wildest finishes Silverstone has ever seen ?

Watch all the best action from the 2020 British Grand Prix ?#BritishGP ?? #F1

A no-score for Bottas saw his gap to Hamilton in the drivers’ championship go from 5 to 30 points. Irrespective of how many races make up the 2020 Formula 1 season, in just the first four races of the season, Bottas’ championship hopes have reached a moment where he requires a DNF or no-score from Hamilton to get himself back in title contention. Despite Mercedes’ dominance, the team has scored only a single 1-2 finish (2020 Styrian Grand Prix) this season. Even if Bottas wins and Hamilton finishes second, it will take the Finn five races to grab the lead from Hamilton (not taking fastest lap points into account). Unfortunately for Bottas, he is yet to score back-to-back wins in his Formula 1 career let alone five race wins on the trot.

In the 2020 British GP and before the tyre troubles, there were two moments when it seemed as though Bottas should have been more aggressive with Hamilton. The first moment was at the race start where Bottas had a better launch than Hamilton and was almost alongside at the entry of turn 1. But instead of holding ground or muscling his way and making it a tad difficult for his team-mate, Bottas lifted off and let Hamilton through. The second moment was at both the safety car restarts where Bottas was busy fending off Verstappen in third rather than chasing down Hamilton for first.

Could Verstappen have won the 2020 British GP?

Two laps to the end of the race, Red Bull Racing decided to pit Verstappen for the soft tyre. At the moment, Verstappen’s gap to Leclerc (in fourth) afforded him a free stop and one assumed that the team-driver had accepted that 3rd was as high as they could finish. It was understandable that they decided to chase the extra point for the fastest lap of the race by taking on the softer rubber. Unfortunately for Verstappen, Hamilton’s tyre was undone after his pit-stop and the Dutch driver was left to chase down a 34 second gap on the final lap – one that would have been around 14 seconds had he not pitted. At the flag, Verstappen finished 5.8 seconds behind Hamilton.

Pits To Podium unanimously chooses Pirelli as the driver of the day.

Who is your driver of the day?

Christian Horner explained his team’s actions, “You could say we were a little unlucky to miss out on the victory today but congratulations to Mercedes who have a very dominant car and it would have been a lucky win. Towards the end of the race Max’s tyres weren’t in great shape, so when (Valtteri) Bottas had his puncture there was no guarantee Max would have got to the end of the race so it was wise to pit for new rubber. I think we have to be grateful to have benefitted from Valtteri’s misfortune and we can be happy with this result.”

P3 babyyyyyy !
Without luck, we wouldn’t have been on the podium, but very happy with how we managed the week-end considering the tough times we are going through at the moment.
We keep pushing ? pic.twitter.com/pb8WLz3mED

The 2020 Formula 1 season is one of Ferrari’s worst starts to a season in many years. The team has acknowledged their car’s flaws and the fact that their fight is in the midfield rather than at the front with Mercedes or Red Bull Racing. In fact, one wondered if Ferrari could get lapped at Silverstone. Despite having the fourth or fifth fastest car on an average this season, Leclerc has scored two podiums in the first four races. After qualifying a surprise fourth for the 2020 British GP, Leclerc ran a clean race and was the first to benefit from Bottas and Sainz’s misfortunes. In contrast, Sebastian Vettel struggled with car balance all weekend to finish a lowly 10th place.

While the podium should lift the team’s morale in a challenging season, the truth also is that Leclerc finished 18-odd seconds behind Hamilton’s race-winning Mercedes – this is after Hamilton lost 23 seconds on the final lap! Ironically for Leclerc, each time he’s finished a race in a points scoring position this season, he’s been on the podium. In the drivers’ championship, Leclerc is in a surprise fifth place while Vettel lies only 13th. As for Ferrari, they are fourth in the constructors’ championship – Mercedes, Red Bull Racing and Mclaren occupying the top-3.

Renault collected a 20-point haul at Silverstone as @danielricciardo equalled his best result for the team in P4, and @OconEsteban came home in 6th#BritishGP ?? #F1 @RenaultF1Team pic.twitter.com/DNIDwEiED0

After shocking everyone with their pace in the early rounds, Racing Point failed to extract similar performance from their car at their home race in Silverstone. The team’s chances received a setback after Sergio Perez tested positive for COVID-19 and had to sit out of the race. The team recalled Nico Hulkenberg as his substitute only to fail to get his car to start the 2020 British GP on Sunday. After an impressive few races in Hungary and Austria, Lance Stroll could only manage 9th and was beaten by the two Renaults and Norris’ Mclaren.

In their earlier avatar as the Force India F1 Team, the team was heralded as the sport’s super-achieving underdog. However, the Racing Point F1 Team has been this season’s underachiever yet as the team has failed to convert their pace advantage into a podium finish or a significant points haul. The team’s highest points score was 18 points at the 2020 Hungarian Grand Prix – while their mid-field rivals Mclaren (26 points, Austria), Ferrari (19 points, Austria) and Renault (20 points, Silverstone) have managed more.

Mclaren and Renault seem to have overcome the challenge of the pink Mercedes car(s) with much ease. #F1 #BritishGP

After scoring only four points each in the opening three races, Renault went five times better in the 2020 British GP after Daniel Ricciardo finished fourth followed by Esteban Ocon in sixth. Ricciardo’s late race overtake on Mclaren’s Lando Norris and Ocon’s overtake on Stroll were noteworthy not to mention Pierre Gasly’s gutsy drive to seventh. As for Mclaren, the team would have scored a fourth and sixth place had it not been for Sainz’s tyre issues. The 10 extra points would have brought them closer to Red Bull Racing for second place in the constructors’ championship. With Alexander Albon failing to score consistently this season, one wonders if Mclaren can get their nose in the fight for second place.

Brilliant! Brilliant fight back by @DaruvalaJehan after the Safety Car restart to overtake rivals to finish 4th. He was as low as 12th at one point. This is a celebration-worthy result. His last lap move on Nikita Mazepin was classic Jehan in action! #F1 #India #BritishGP #F2

Red Bull Racing junior and Indian driver Jehan Daruvala drove a spirited race and pulled off feisty overtakes in Race 2 (sprint race) of the Formula 2 championship. Despite starting and running in 12th for most of the race, Daruvala’s team made a smart strategy call under the late-race safety car to switch to fresh rubber. The Red Bull Racing junior made the most of this opportunity as he demoted his rivals with every passing lap including a last lap overtake on Nikita Mazepin to claim 4th place at the chequered flag – his best finish in Formula 2.

This post has been edited for this blog and was first published on Firstpost. 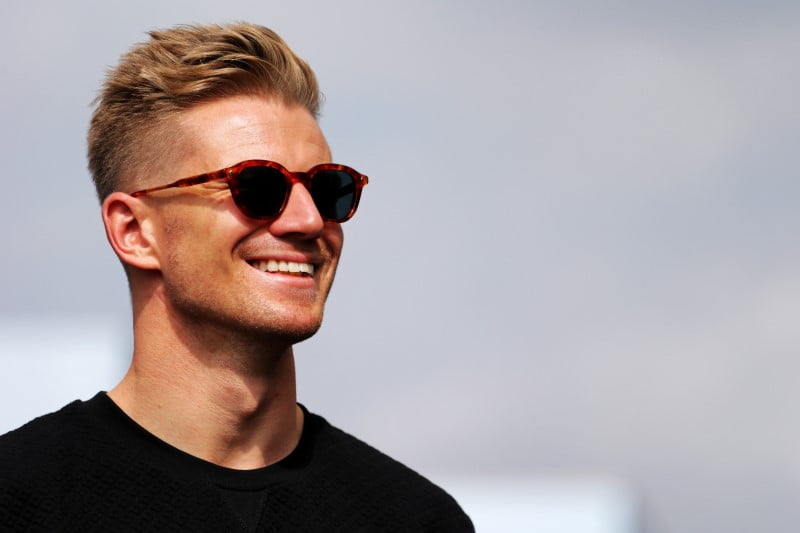 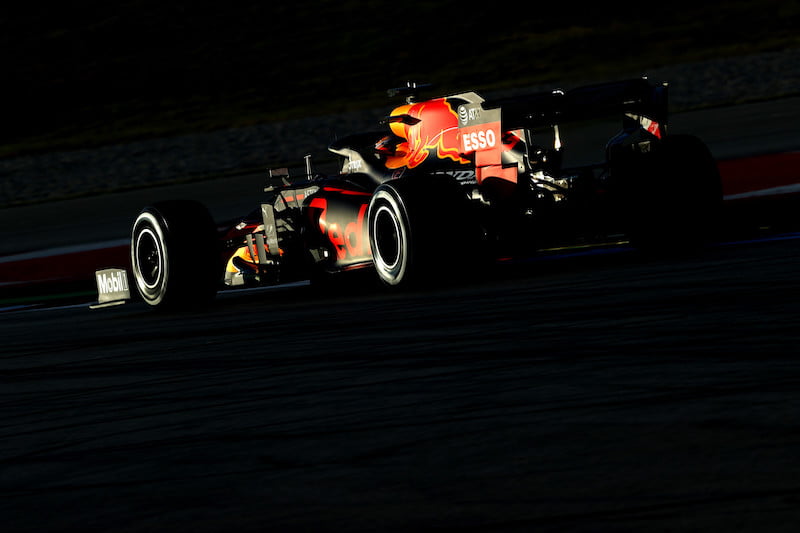