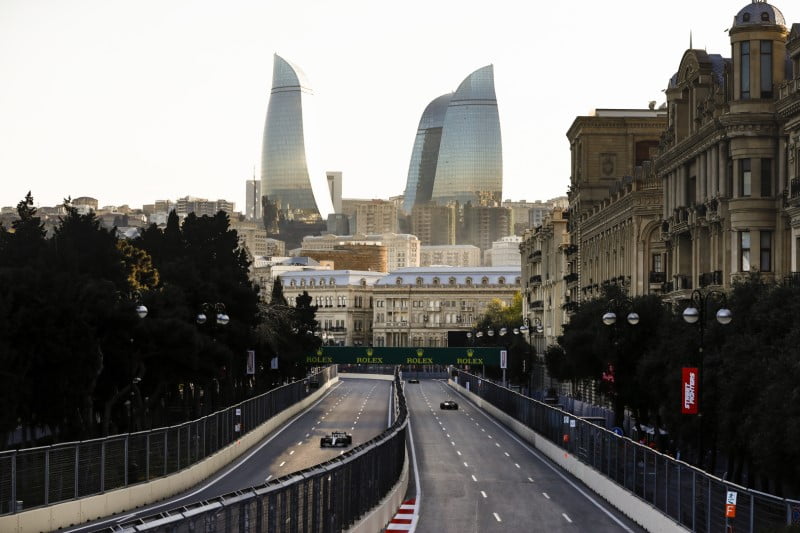 ‘Know Your F1 Circuit’ is a new series launched on my F1 blog. The posts under this series will be penned by Saumil Patel, an avid fan of the sport. You can follow the full series throughout the season by using the ‘Know Your F1 Circuit’ tag. This week’s post focuses on the ‘Baku City Circuit’, the venue of the ever-thrilling Azerbaijan Grand Prix.

The Monaco Grand Prix was an eye feast with its picture-perfect setting. The Azerbaijan Grand Prix trails with its own charming, photogenic mélange of Eastern Europe and Western Asia. A unique, primeval and captivating history restored to its former glory thanks to the revenues from energy export.

Oh yes, we are going to be treated to one more exciting race set in an enchanting location.

Azerbaijan “The Land of Fire” was relatively obscure on the tourist map till the turn of the century. A lot of development and showcasing was spurred thanks to favourable global energy prices. What better way to showcase one’s arrival than hosting global events which had all the trappings of glamour, uncertainty, thrills, speed and a very large ready global audience? Thus, was born its association with the world of motor sports.

Baku is the largest city of Azerbaijan (and the Caucasus region) and is its capital. Home to UNESCO World Heritage Sites, historical landmarks and a very picturesque location it fitted the bill perfectly. The hill on which it is built forms an impressive amphitheatre contour which descends into the bay area of the Caspian Sea. The street circuits and their revisions were built to showcase the beautiful boulevard, Azadliq Square, Government House, Palace of the Shirvanshahs and Maiden Tower.

In 2012, The City Challenge Baku a stand-alone event for GT3-spec cars in Baku was organised by the City Challenge GmbH on a 2.144kms street circuit around the Government House. The track was blend of narrow side streets, wide boulevards and slow right-angle corners which did not do much to thrill motor sport enthusiasts. But since it was live action for the first time, the citizens were enthralled and the event was declared an enormous success.

In 2013, The Baku World Challenge (finale of the FIA GT Championship) organized by Jean-François Chaumont was held here on a new 4.380kms street circuit. The new location featured the modern broad boulevard that runs parallel to the spectacular seafront. The pits and paddocks were built in front of the Crystal Hall with the National Flag Square in the back drop with its gigantic (70 by 35 metres, on a pole 162 m high) national flag fluttering high overhead. The circuit had the right blend of flat outs, hairpins and narrow street sections through the old town making it fast and challenging for the drivers and thrilling for the enthusiasts.

In 2014, The Baku World Challenge once again saw revisions to the circuit making the circuit even more challenging.

The low speed “Bus Stop” was removed, entry into the “Old City” was revised to reduce speed, a straight replaced the third chicane and the final chicane was mirrored from right – left to left – right. These revisions effectively shortened the circuit. The last race of the Blancpain Sprint Series was held here.

#MaxVerstappen is the only driver to qualify on the front two rows in every race this season.#F1 @msportstats

Encouraged by the success and having familiarized itself with the world of motor sport the government decided to bring in the single most important motor sport, the Formula One to its city to seal its place on the tourist and motor sporting events map.

Herr Hermann Tilke (born 31st Dec 1953, a German engineer, race driver and circuit designer who, to his credit has designed several Formula One circuits) was chosen to design the new course for the F1. Inclusion of as many of the city’s historical famous landmarks as possible was a key consideration whilst finalizing the layout.

The new layout would be around the old city, parallel to the wide boulevards and Presidential Palace with a long straight to the start line. The pits and paddock would be situated in and around the Government House. The circuit would now measure 3.732 miles / 6.006 kms. and feature a mix of narrow slow speed technical sections and flat-outs along modern boulevards. The circuit was set up at an estimated cost of US$ Sixty Million.

2016 saw the inauguration of the first Formula One race, The European Grand Prix was flagged off. The next year onwards it was renamed as the Azerbaijan Grand Prix.

The Baku City Circuit is an anti-clock street circuit which assimilates the synergies of extreme straights and technical sectors. Topographically, the circuit is majorly flat and below sea level. The highest point (Turn 13) is 2.1 meters above sea level and lowest point the finish line is 24.7 meters below sea level. Currently, it is the fastest street track on the Formula 1 calendar. It is also the second longest after Spa-Francorchamps in Belgium. One can expect average lap speeds of around 210 km/h with top speeds flirting with over the 350 km/h mark on the odometer. It is a three-section track, series of short straights and 90° turns in the city centre, the challenging and technical section around the perimeter of the old walled city, and a two kilometer straight down Baku Boulevard to the start line.

The first and third corners along with the straights would see overtaking. By far, in the initial stages, turn one would be challenging with tyre and brake temperatures not optimized and drivers having to shed a lot of speed very quickly. If per chance there is a restart all equations could change for one reason. The long main straight will require smart restart tactics by the lead pack to avoid being slipstreamed into Turn 1. The mid-section through turns eight to twelve will require precise judgement, any mistakes here will punish the drivers severely. Descending into turn fifteen onto the last section, at turn sixteen (90º) will poise challenging for drivers. Past turn eighteen drivers will go flat out.

The teams will have set the cars up to strike a balance between speed and downforce taking into consideration fuel weight and the winds (tail and cross) coming from the Caspian Sea.

Being a low tyre degradation track the pit stop window will be widespread, rider being that there is no Safety Car incidence. The teams estimate the pit lane time loss at 21 seconds.

Tyre strategy in all probabilities will be one pit stop – C4 (Soft) / C3 (Medium) combination up to the 25th lap. Alternatively, a C3 (Medium) / C4 (Soft) if pitting post 26th lap. Pirelli is bringing the same soft range as it did in Monaco, but one expects the tyre behaviour to be different given the circuit characteristics.

Pole position Right-hand side of the track

Distance Grid to Turn One: 330m

Coming off a well-deserved win at Monaco, a revitalized Max Verstappen will be brimming with confidence. Mercedes have historically fared well at this circuit and have scored a podium every year since 2016 while Ferrari has been on the podium thrice. The fight up-and-down the order might remain the same, but the Azerbaijan Grand Prix at the Baku City Circuit will most-certainly going to be a thriller!