An alt-F1 blog that explores the sport and business of Formula 1 + the home of the Inside Line F1 Podcast
Kunal's F1 Blog
Skip to content
Homepage F1 Features Did You Know? F1 History & Stats: Sochi, Russian GP 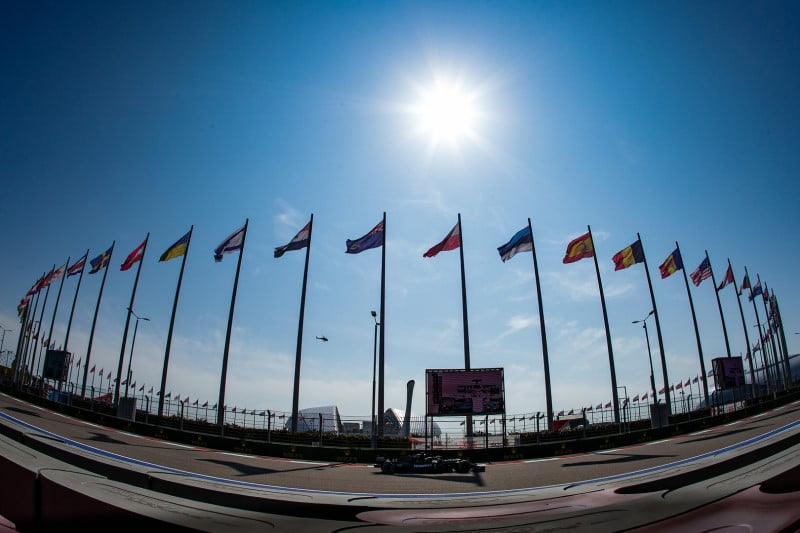 ‘Know Your F1 Circuit’ is a new series launched on my F1 blog. The posts under this series will be penned by Saumil Patel, an avid fan of the sport. You can follow the full series throughout the season by using the ‘Know Your F1 Circuit’ tag. This post focuses on ‘Sochi Autodrom’, the current home of the Russian Grand Prix.

The Sochi Autodrom, located 15 kms southeast of Sochi, is close to the Black Sea resort town of Adlerskiy, Krasnodar Krai, Russia. The circuit was designed by Herr Hermann Tilke around the venue of the 2014 Winter Olympics. It consists of a permanent track section with a pit building and well-equipped paddock facilities, the second section is a temporary part that snakes its way through the Olympic Park. Sochi shares this similarity of design outlay with the Beijing Olympic Green Circuit and the Sydney Olympic Park Circuit.

Formula 1 has had an excruciatingly elongated and frustrating wait with multiple abortive attempts before Sochi fructified. Bernie Ecclestone was pursuing his personal dream of expanding the footprint of Formula One into the “Iron Curtain” for quite a few years. He nearly had his breakthrough in the early 1980s with a proposed Moscow circuit for the 1983 calendar but bureaucratic complications blanked his dream.

Disheartened, he turned to another communist country – Hungary and successfully extended Formula 1 racing into the “Iron Curtain” in 1986. A second opportunity presented itself in 2001 when President Vladimir Putin expressed his personal support for the “Pulkovskoe Ring” project in Saint Petersburg but that too did not work.

On the third attempt in 2003, the Moscow council approved the project to build a circuit in Molzhaninovsky district of Moscow, but commercial contract disputes ensured its premature end. On the fourth attempt in 2008, a Formula 1 circuit, seventy-seven kms off Moscow, located in the village of Fedyukovo, district Volokolamsky got sanctioned. The circuit was called the Moscow Raceway. It was designed by Herr Hermann to host both Formula One and Moto GP races. The circuit was completed in 2012 and hosted the FIA GT1 World Championship, the Formula Renault 3.5 and 2.0 Series and the Superbike World Championship but the plan to host a Grand Prix never fructified.

Bernie Ecclestone’s tenacity finally paid off when Sochi was officially announced in October 2010 as the venue for the Russian Grand Prix for the 2014 calendar with a budget outlay of US $195 million. It took thirty-six years of perseverance – fifth time lucky, I guess!

Fact: Even after finishing with a DNF at the Italian Grand Prix, Verstappen is still favored to win after claiming his seventh victory of the season at the Dutch Grand Prix the week before.

Bottas’s podium hopes were dashed by Raikkonen at Sochi back in 2015 #RussianGP #F1 pic.twitter.com/J9osnZraZI

Sochi Autodrom is a high tech, feature packed circuit. Race Control has a real time full HD feed streaming in from 45 track side cameras displayed on 56 screens. Instead of motorhomes, teams have their own buildings to operate out of. This gives them a better all-round experience and offers much more flexibility. The infrastructure around the track includes hotels of different categories with seamless connectivity by road, rail and air.

The 5.848-kilometre circuit is the fourth-longest circuit on the Formula 1 calendar. It features one of the longest pit lanes and 18 corners, many of which are 90º turns. From grid to corner 2, (900 meters long and the first braking point) is taken flat-out as a result corner 2 has witnessed several incidents and yet remains undoubtedly one of the best overtaking spots with more than adequate runoff area.

Corner 3 is distinctive and similar to Istanbul Park’s corner 8, it is a 750 meter long 180º left hander which is taken at high speeds – in a well-balanced car drivers can use it to their advantage to set up a overtake. There is a smaller flat-out kink between corners 5, 6 and 7. Exiting corner 10, a sharp 90º right hander leads to the 750-meter fast “back straight” through corners 11 and 12 ending at corner 13, a sharp 100º right hander with overtaking opportunities.

Corner 14, a fast, double apex sweeping left followed by corners 15 and 16, medium speed left right chicanes into the small flat-out up to corner 17 a sharp 90º left hander followed by a small straight into corner 18, another 100º left hander.

The genomes of Sochi are well balanced – fast and technical. Mix of fast sweeping corners and low-speed technical corners peppered with flat out straights. Certainly not a walk in the park considering low grip and not many overtaking opportunities. Qualifying will matter here.

What a move by Charles! 👌

A rookie Leclerc goes around the outside of Kevin Magnussen at Sochi’s epic Turn 3 back in 2018 🤩#RussianGP #F1 pic.twitter.com/u7Waj8m1pa