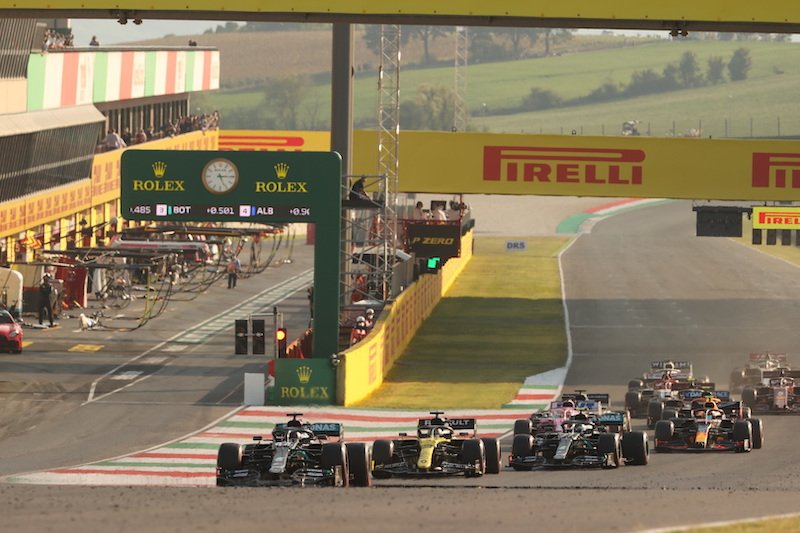 A peek into how F1 teams heavily rely on simulation tools to tackle the unknown challenges thrown by new racing venues in 2020.

A 17-race calendar has now been confirmed for the 2020 Formula 1 season. Thanks to the pandemic, the current season has seen several firsts – such as racing twice in succession at the same circuit (Austria, Silverstone and Bahrain to-come) and the return of five classic venues that haven’t hosted a Formula 1 Grand Prix for some years.

As Nurburgring (last race held in 2013), Imola (2006) and Turkey (2011) prepare to welcome Formula 1 back, Mugello and Algarve will host a Grand Prix for the first time ever. While Bahrain has hosted races since 2004, this will be the first time Formula 1 races on the ‘outer track’ layout. In the modern era, 2020 is also the first time a season will witness six new venues. But of course, one could argue that some of these venues aren’t ‘new’ per se as they are only ‘returning’ to host a Formula 1 Grand Prix. In this post, we look at the technical challenges the teams will need to work on.

Simulation is one area that Formula 1 teams have invested heavily in through the years because it offers vital data without requiring to even turn a wheel of the car. Simulation is a sophistication that is unregulated by the FIA (non-CFD) in terms of costs, setup, etc. and offers a distinct performance advantage. Currently, the key sources of data are software-in-loop, driver-in-loop, rig testing and dyno. Jargons aside, we will explain how F1 simulation tools will help teams approach the new races on the calendar.

Returning Venues – Are They New?

In this perspective, Formula 1 teams would loosely define a circuit as ‘new’ or ‘returning’ based on whether the layout has changed since they last raced there. If the layout hasn’t changed, as is the case for Turkey, Nurburgring and Mugello, the teams would know the ‘racing line’ from before and this would be handy during pre-event simulations using the software-in-loop simulator (a simulation run by software and without a driver). Simply put, teams would simulate their current car on this ‘racing line’. This would help the team understand how different aspects of the car and it’s systems would cope around that circuit.

Of course, FIA usually provides the basic architectural drawings from which the teams would procure measurements of track gradient and camber, but they will also perform a physical measurement during Thursday’s ‘track walk’ session at each venue. If the measurements differ from their prior values, these would be re-calibrated into the F1 team’s simulations. In fact, these drawings are used to derive the racing line that is eventually fed in various simulations. Finally, on the question of whether Mugello will be treated as a ‘new’ or ‘returning’ circuit – let’s remember that this circuit has hosted several testing sessions in the previous eras.

For the new venues such as Imola (the layout has changed since Formula 1 last raced), Algarve and Bahrain’s ‘outer circuit’, teams would rely on Lidar scans to get circuit data that can be fed in their simulators. Such data collection is usually outsourced by the teams and in fact, there are only a couple of Lidar scanning providers that all teams work with.

Apart from performance, teams would also focus on reliability – are there any peculiar corners (for example, Turn 8 at Turkey) that stretch mechanical elements (suspension, gearbox, etc.) to their limits? The objective would be to check if any of the components on the car are being put in a scenario they weren’t designed for – basically, stretched beyond their design constraints.

Typically, teams would send personnel to these venues well in advance to gather circuit data but one isn’t sure if this is possible given the pandemic-induced travel restrictions. Another common habit is for teams-drivers in junior series to rent a road car and drive around the circuit to familiarise themselves; the data and information being further shared with their Formula 1 partners (Prema and Ferrari, for example). In the absence of such options, teams will look for similarities of peculiar corners to known corners at existing circuits while running their simulations. Such referencing helps arrive at suitable setup options before even reaching the track.

Tyres have always been a talking point in Formula 1 and they will bring their own set of challenges to solve at these venues. Pirelli, the official tyre supplier, will work with the FIA and teams in understanding tyre usage and degradation for each new venue. Currently, Pirelli and the FIA have a standard allocation of tyre compounds for each team-driver in 2020. However, one can expect this rule to be relaxed as we approach the second-half of the season. Given Pirelli’s lack of tyre data at these new venues, it would be understandable if they go conservative with their compound recommendations.

As with the existing circuits, one of the key challenges would be understanding tyre energies and loads through different corners and if any specific corner(s) leads to a specific impact on lap time (again, Turn 8 at Turkey is a good example). Similarly, teams would be eager to find out if a specific corner takes away more bite from the tyre than the others. In the 2020 Formula 1 season, we have seen drivers being asked to ‘save’ tyres through corners (Valtteri Bottas through Turn 3 in Barcelona) and similar information would be sought for the new venues as well – which corners might require drivers to manage tyres better to reduce wear or save tyre energy. While simulations will help gather such information, actual race strategy would be worked upon from data collected during the Free Practice sessions on Friday.

The F1 simulation tools would be relied upon heavily to arrive at the ideal ‘wing level’ (or downforce levels) for each circuit – aerodynamic efficiency being key focus to find a balance between downforce and low drag to aid a competitive lap time. Apart from downforce, the teams would also look to test different bodywork configuration with an eye on cooling the car to an optimum level. Typically, the European season ends mid-September, but in 2020, races in Europe will be held all the way till November. The cooler temperatures at the Nurburgring (expected to go as low as 10°C) will be taken into consideration here.

Apart from finding solutions to go faster, teams would also be working on finding the best braking solution for their drivers to use. The simulation models will reveal brake energies (heat cycles) for each corner and give estimates on wear based on braking forces. In the case of brakes, the further challenge would be understanding and predicting the braking requirements and ordering the correct brake disc materials, some of which have long manufacturing lead times.

While architectural drawings might help with the ‘racing line’, it would still be in 2D. This means that teams will look for information regarding kerb profiles and track undulations to work on ideal suspension setup. Various suspension geometry options would already be tested in the driver-in-loop simulator using Lidar data, offline tools and rig testing – basically, teams would have a baseline setup before arriving at a new circuit.

Likewise for the control systems on the car, too. Teams would start with a conservative approach before using track time to optimise further. For example, a conservative approach on recovery of electrical energy during braking would be taken for initial running on Friday. However, this will be further optimised as the track evolves and stabilises in terms of grip for the race weekend.

Finally, the four power unit manufacturers will undertake simulations to fine tune their electrical energy deployment for each circuit and also choose the most-optimal engine strategy (compromise between performance and wear) to run over the weekend. These power units would have been bench tested and done several race distances on the dyno using the predicted lap profile of these circuits. Further driveability improvements would be made during the practice sessions.

For all teams, the proof of their simulations would be revealed during the Free Practice sessions on Friday. In these sessions, the data collected from the real car would be used for further crunching by ‘mission control’ at the factory. This is also where teams correlate between real and simulated car data to further optimise performance and predict reliability issues.

Finally, Imola will add another dimension to the challenge – a two-day format as opposed to the regular three-day format followed by Formula 1. Here, the teams will rely more on their driver-in-loop simulator than on on-track practice to extract performance. In fact, teams will choose to run track and simulator operations in parallel for the single 90 mins practice session on Saturday – like they would for any regular race, too. This would mean two drivers in the racing car on-track and one driver in the driver-in-loop simulator at the factory.

To sum up, simulation along with other tools will be heavily relied on as teams look to correlate, predict and optimise performance for every aspect of the car for each of the new venues. However, it’s not the machines alone that pull the heavy load. Usually, new races mean long nights for the team members – at the track and at the factory!

Sarvesh Yechury is among one of the few Indian motorsport engineers with more than 15 years of experience in the international industry. He has worked with teams in Formula 1, Formula 3, GP3 and A1 GP. One of his most successful and longest stints have been with the Racing Point F1 Team (formerly Force India F1 Team) where he focused on various aspects of Vehicle Performance and Race Engineering.

Kunal Shah is an FIA-accredited journalist for Formula 1. He writes for various publications, hosts the Inside Line F1 Podcast and is the Formula 1 Producer for Viasport. He is the former Head of Marketing & Sponsorship for the Force India F1 Team and the Program Manager of the “One from a Billion Hunt”.

This column was first published for Evo India.