An alt-F1 blog that explores the sport and business of Formula 1 + the home of the Inside Line F1 Podcast
Kunal's F1 Blog
Skip to content
Homepage F1 Features 2021 Portuguese GP: The Lewis Hamilton Show 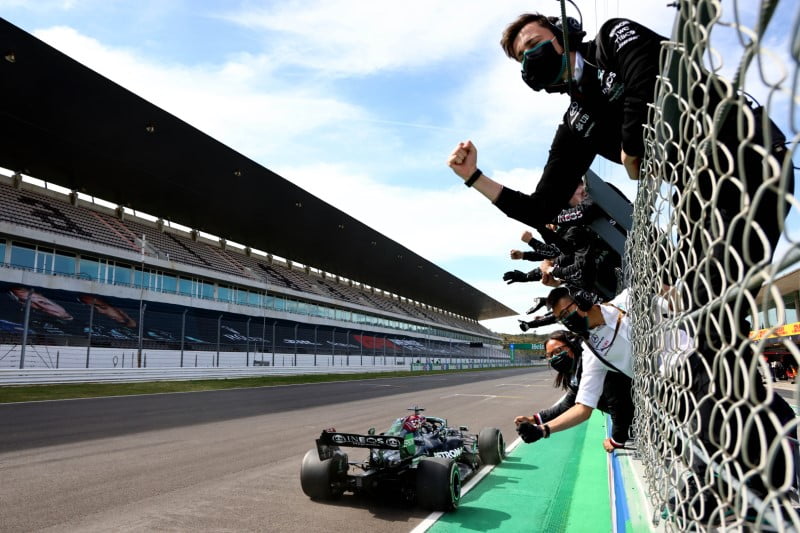 The 2021 Portuguese GP was an out and out Lewis Hamilton show.

A pole position is yet to be converted into a race win in 2021 and the Portuguese Grand Prix this weekend furthered this trend. The other two trends include – Lewis Hamilton scoring his last four wins while starting from P2. And the most-concerning of them all, Max Verstappen continuing to make errors, however small, through the Grand Prix weekend.

The podium trio created their own history in Formula 1. It was the 15th time a Formula 1 podium was braced by Hamilton, Verstappen and Bottas (in no particular order) – the highest in the history of the sport. Given the competitiveness shown yet, one waits to see how many more times this season will the seemingly obvious podium result play out.

Lewis, Max, and Valtteri have now shared the podium 15 times – more than any other trio in F1 history 👏#PortugueseGP 🇵🇹 #F1 pic.twitter.com/OGPhvMfwQS

On Saturday, Bottas denied the reigning World Champion his 100th pole position by 0.007 seconds. Come Race Day, it was Hamilton who stole the show – even though the fans eventually voted for Sergio Perez as the ‘Driver of the Day’. After losing P2 to Verstappen at the restart, Hamilton capitalised on his Dutch rival’s mistake a few laps later to regain second place behind Bottas. On lap 19, Hamilton’s superior race pace saw him overtake Bottas for the lead into Turn 1.

In the laps that Hamilton chased Bottas, it was evident that the Briton had more speed and was being held back. Hamilton’s timely overtake on Bottas saved Mercedes the headache of issuing team orders in the race. “I didn’t quite get as good a start as Valtteri, then lost out on the restart (to Verstappen) which was not good. I was not happy about that, naturally. But that race was satisfying, when you’re in third and have to overtake two amazing drivers – amazing! Having races like that is what I live for,” summed up Hamilton.

The last five races that featured #LewisHamilton and #MaxVerstappen both, have an interesting win pattern –

Pole-sitter Bottas’ race was affected by an issue that has dogged the Mercedes driver in all races this season – tyre temperature. In the opening stint in the race, Bottas was unable to pull a gap to the field despite being in the lead and running in clean air. The straight line speed advantage of his Mercedes power unit kept a charging Verstappen at bay but Bottas had no answer to Hamilton’s attack. After losing the lead, Bottas was fighting for the second spot on the podium with Verstappen – a position he lost on-track after the first round of pit-stops. At the flag, Bottas had to settle for third place and an extra point for the fastest lap of the race.

Said Bottas, “Obviously not what I was aiming for today because when you start from pole, you want to bring home the win. I think ultimately the main issue was the first stint – I was struggling for pace and I still don’t understand why. The warm-up with the hard tyre was slow after the pit stop and Max managed to catch me.”

In three out of the three opening races, Verstappen and Hamilton have battled on-track. In each of these races, we have also seen unforced errors from Verstappen – more specifically down to honouring track limits. In Bahrain, it cost him the race win. In Portugal this weekend, it cost him pole position and the fastest lap of the race. Apart from these infringements, Verstappen’s driving errors cost him pole at Imola and track position to Hamilton in this race.

Red Bull Racing’s Helmut Marko told Sky Sports Germany, “Now we’ve lost the victory, fastest lap, and pole position (to track limits). All good things come in threes. I hope that’s the end of it. Something has to change. Either you make a boundary with kerbs or you make gravel or something. If you go out, there’s an automatic penalty.”

Signed, sealed and delivered, by @Max33Verstappen! 💌

This move saw him snatch P2 from Valtteri Bottas, to keep only eight points behind Lewis Hamilton…#PortugueseGP 🇵🇹 #F1 pic.twitter.com/3Hs3h9QkhN

Explaining his struggles, Verstappen said, “Something about this track really does not suit our car and I think in general this was a bit of an off weekend in terms of grip and overall pace. We knew last year that we weren’t particularly strong here, so this year has been a bit better and we managed to finish ahead of one Mercedes, but it wasn’t quite good enough to get them both.”

While Verstappen’s race craft has become much-cleaner than his early days with Red Bull Racing, limiting unforced errors and maximising each weekend would be important if the season is going to be a long and closely matched fight with Hamilton-Verstappen. After three rounds, Verstappen is 8 points adrift in second place to Hamilton in the Drivers’ Championship. Given the Red Bull Racing-Honda package and their supposed edge over Mercedes, the Dutchman should actually have been leading the title race.

The 2021 Portuguese Grand Prix also saw a rare chase between Bottas and Verstappen for the extra point awarded for the fastest lap of the race. First to go was Bottas, who made an extra pit-stop 3 laps before the end of the race. The resulting gap then allowed Red Bull Racing to attempt the same strategy with Verstappen, pitting him for fresh rubber a lap later. At the flag, it was Verstappen who claimed the extra point. But a track limits infringement handed the point to Bottas.

Charles Leclerc did brilliantly to make this move past Esteban Ocon stick… and it took a lot of patience to get there!

McLaren’s Lando Norris has continued to shine bright this season. In each of the three races yet, the Briton has scored a top-5 finish and now finds himself third in the Drivers’ Championship. The McLaren driver had his work cut out on Race Day after qualifying seventh. “It was a strong race by the whole team, and a well-executed strategy. I got past the people I needed to get ahead of in the early laps at the start, then the restart and the pit stop. I’m really pleased for everyone in the team and with my performance,” said Norris of his result. His teammate Daniel Ricciardo started 16th after a disastrous qualifying session but managed to gain positions in the race to finish 9th.

Ferrari’s Carlos Sainz Jr. was the biggest disappointment from the drivers starting in the top-10. After out-qualifying his much-touted team-mate Charles Leclerc in only his third race for Ferrari, Sainz finished 11th and outside of the points. The Spaniard rued his tyre strategy saying, “Even though I got a good start, the race was very tough after the pit stop. During the first stint I was feeling very good on the Soft tyre behind Lando, Then, we tried the undercut by changing quite early onto the medium and it didn’t work. From there on, it was a big struggle to make it to the end with that compound due to the graining.”

RIC: Fortunately, a lot of overtakes. I made up places on the opening lap. It’s a wide circuit and can take different lines and make up positions. I think I made up three positions then. My target was to make up five! #F1

Leclerc continued his fine form to claim 6th, ahead of the Alpines of Esteban Ocon and Fernando Alonso while Pierre Gasly scored the final point. Alpine saw a fine upturn in form in Portugal, scoring double points in two out of the three races this season. “We were fighting with Ferrari and McLaren and this is where we want to be. Formula 1 is more fun when you’re racing near the front! Today’s race was well managed from start to finish. Our strategy was spot on, both drivers managed their first stint well then were able to push on the hard tyres in the second, enjoying themselves and making up positions,” said Marcin Budkowski.

In the Drivers’ Championship, Hamilton leads with 68 points – but the battle for P3 has four drivers separated by 15 points, Norris being chased by Bottas, Leclerc and Perez. In the Constructors’ Championship, four teams (Mercedes, Red Bull Racing, Mclaren and Ferrari) continue to score bulk of the points – Alpine in fifth, have scored less than a third of points (13 points) to Ferrari in fourth (42 points).

The upcoming weekend sees the Formula 1 circus shift to Spain – a venue that has seen more action from the teams and drivers than most others. However, one must expect the unknown since this year’s pre-season test was held in Bahrain and not the aero-heavy Circuit de Catalunya in Barcelona.