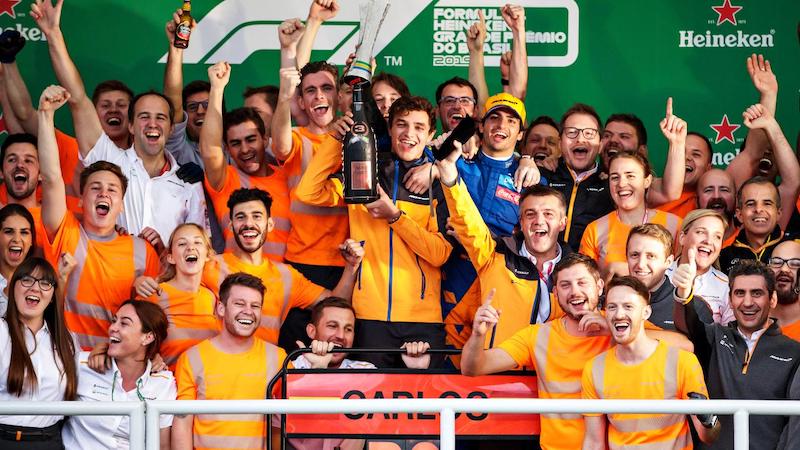 A look back at Mclaren’s struggles in the hybrid-turbo era of Formula 1 followed by their much-cheered resurgence in 2019. Will their journey to the top continue in 2020?

When Carlos Sainz claimed a fine third place at the 2019 Brazilian Grand Prix, it ended Mclaren’s podium drought – which had spanned a staggering 2072 days (or 5 years and 8 months). This is an immensely long period by all accounts – and more so for a team like Mclaren, who are among the most successful constructors in the history of the sport. Sainz’s podium was a powerful indicator of the shift in Mclaren’s form that we’d been seeing all season long. The Mclaren cars were consistently recording double points finishes and also regularly finishing as ‘best of the rest’ – after several seasons of poor showings, the team was finally making a comeback.

All three deserved it 👏

But @LandoNorris is your #F1 Rookie of the Year for 2019! Take a look back at how he won your votes 🎥

Mclaren finished 2019 with fourth place in the Constructors’ championship, which is their best-ever result in the hybrid turbo era. It is also their best-ever championship result since 2012, when they came third. Shared a triumphant Andreas Seidl, “For us it’s great that we could secure [fourth] in the constructors championship. It is simply a great reward for all the hard work everyone has put into this year here at the track and especially back home in the factory.” What Seidl failed to mention is that this precious outcome from 2019 is what the team has been unsuccessfully seeking for several seasons now – and they can finally heave a sigh of relief, knowing that they are finally moving forward.

The past seasons have been marked by disappointments and struggles for Mclaren. They receded to being backmarkers on the grid, a shadow of their championship-winning selves. Most of the team’s troubles can be traced to their decision to move from Mercedes power to Honda power in 2015 – and hence giving up the winning Mercedes engine. It was a season of memes and embarrassment for the team, best remembered for visuals of Fernando Alonso pushing his stationery Mclaren to the pits (Hungary, 2015) or sunbathing on a deck chair during qualifying because his car failed to start (Brazil, 2015). At the Japanese Grand Prix in 2015, Fernando Alonso famously slammed the Honda engine as a ‘GP2 engine’ – an apt summation of a broken team in a wretched season. They finished the 2015 season in ninth place in the Constructors’ Championship – basically, second last on the grid. In 2016, the team seemed to be on the path to recovery with a sixth place finish in the championship – but the joy was short-lived.

The 2017 season was a nightmare in every sense as the Mclaren was slow and unreliable. In the first seven races of the season, they could not score a single point – struggling to even get their cars to the finish line. Alonso’s dissatisfaction with the team was so high, that he opted out of the Monaco Grand Prix (commonly seen as the most prestigious race on the F1 calendar) to drive in the Indy 500. Eventually, Mclaren finished ninth in the Constructors’ Championship once again – the final straw that led them to announce a move to Renault power in 2018.

Moving to Renault power in 2018 was a mixed bag for Mclaren – while their reliability improved, they were still stuck in the ultra-competitive midfield. Their drivers were finishing outside of the points as often as finishing in the points as the Mclaren was simply not competitive enough. Despite finishing sixth in the championship, there was a sense of uncertainty around the team’s future – caused by numerous seasons of failures combined with the departure of the lead driver Fernando Alonso.

We now know how the 2019 season has turned out for the team – the team has truly risen from their ashes and recorded strong showings all season-long. They were consistently the best of the rest (behind Mercedes, Ferrari and Red Bull) and were significantly faster than the other mid-field teams.

Sample this statistic: Mclaren claimed only 133 points across all three seasons with Honda (2015 to 2017) – while in 2019 alone, they scored 145 points. Summarized Sainz, “We are able to perform at a high level on Sunday, which gives us an edge over midfield teams. We do not assume we are the fastest midfield car as we saw in many circuits this season. However, we are just consistently there, when it comes to racing our good execution makes us get a lot of points.”

The arrival of Seidl as Team Principal

In the past few years, Mclaren has seen a parade of changing leadership – after all, the easiest thing to change in a team that isn’t performing is the leadership. It could also be argued though that the team’s lack of consistency has been caused by these constant upheavals, and that this was a team in need of reassurance rather than revision. In 2019, the team seems to have finally figured out its leadership structure with the arrival of Andreas Seidl as Team Principal – the man credited with Porsche’s LMP1 sportscar success. Carlos Sainz has been very positive towards Seidl, saying, “Seidl has brought good leadership to team. He has strong decision making, he has been in winning projects and is passionate.” Added teammate Lando Norris, “Everyone is feeling a lot more at home, and more fired up (after Seidl joined the team). The structure in place is very clear for everyone and easy to work through. It is not huge things, but small things here and there which simplify the work tasks.”

Interestingly, Seidl chose to do away with the matrix-style structure which Mclaren used under Ron Dennis, instead opting for a simpler and more traditional motorsport structure. That said, it is impossible to isolate the team’s 2019 turnaround to Seidl’s contributions – as Seidl himself said, “A lot of the changes that Zak (Brown) initiated last year are showing results now.”

In 2019, Mclaren had an all-new driver pairing of Sainz and Norris. This was the first time since 2007 that the team had an all-new driver line-up – and amazingly, it has worked perfectly well. Sainz has been on the F1 grid since 2015, but has struggled to showcase his true talent. This season Mclaren have allowed him to show maturity, consistency and growth as the team’s senior driver. Meanwhile, teammate Norris, who was in his rookie F1 season, brought the raw brilliance of young talent. The duo got along famously with their ‘bromance’ quickly taking the paddock by storm. In fact when Sainz won his podium, Norris was the one popping the champagne! Mclaren have a reputation of being a formal and fusty team – and the fun and freshness brought by Sainz and Lando are just what the team needed to usher in an age of renewal and resurgence.

“The support has been absolutely outstanding.” 🧡

A message from @ZBrownCEO as we bring the curtain down on a memorable 2019 season. #FansLikeNoOther pic.twitter.com/oqY9HMoUZ9

For the sake of comparison, it is relevant to look back at Mclaren during the days of Alonso. We all know that Alonso is a double world champion – and also a highly respected and talented driver. It so happened that Alonso’s position in Mclaren became vastly exaggerated over time – as the team’s performance sank lower, he seemed to be their savior and only hope for recovery. As expressed by Alonso’s 2017 teammate at Mclaren Stoffel Vandoorne, “Alonso always got what he wanted.” Vandoorne further revealed, “There was always two, three well-placed people in the team who made sure everything went the way Fernando wanted it to be. The team gave him all the support and power.” Was Mclaren so focused on pleasing Alonso, that it negatively impacted their larger objectives? Worse, Alonso developed an increasingly pessimistic attitude towards the team’s prospects – there were even accusations that he was deliberating retiring his Mclaren (which he refuted).

As Sainz declared at the end of the 2019 season, “We are not only the best of the rest but we are managing to profit if something happens to the guys in front.” His words ring true – Mclaren were well clear of their closest rivals Renault in the Constructors’ Championship. Mclaren’s challenge is now about getting closer to Mercedes, Ferrari and Red Bull and being in the leading mix more often – and not just when something happens to them. Seidl is focused on ongoing improvement, saying, “In the short term, we want to keep developing. Next year, we want to make the next step in terms of car performance.” The team is currently building their own wind tunnel at Woking and will also debut an all-new simulator in 2020, with the hope of narrowing the gap to the leading teams. In 2021, the team will return to Mercedes power, which is an interesting prospect.

The team will also hope for better television coverage next season – after the Belgian Grand Prix, Sainz pointed out that his car was televised for just 15 seconds of the race, much to the chagrin of fans and sponsors. In fact, there were several Mclaren battles that were missed by television through the season. This situation prompted Mclaren’s management to formally engage in talks with Formula 1.

While writing this piece, we were reminded of a very striking incident which occurred at a press conference at the 2019 Belgian Grand Prix (where we were present live). Lando Norris, while answering a question from the press, casually mentioned, “Let’s look at last year…”, before correcting himself hastily to say, “Actually, let’s not look at last year!” The audience erupted in laughter, but Norris was telling the truth. Mclaren needs to maintain their gaze forward and steer clear of the turmoil of the past seasons. The power of momentum in sport is valuable – and Mclaren’s positive momentum from 2019 has poised them perfectly for a confident start to 2020. Both their drivers are in form, their team structure is working, and the podium in Brazil was the cherry on the cake. Even better, the team will receive improved payouts for 2019 from the FIA, which can in turn be invested back into the car. For now, Mclaren should be proud of their 2019 season – and hold their heads up to say with pride, ‘we are back!’