An alt-F1 blog that explores the sport and business of Formula 1 + the home of the Inside Line F1 Podcast
Kunal's F1 Blog
Skip to content
Homepage F1 Features Math: Mick Could Race For Ferrari By 2024 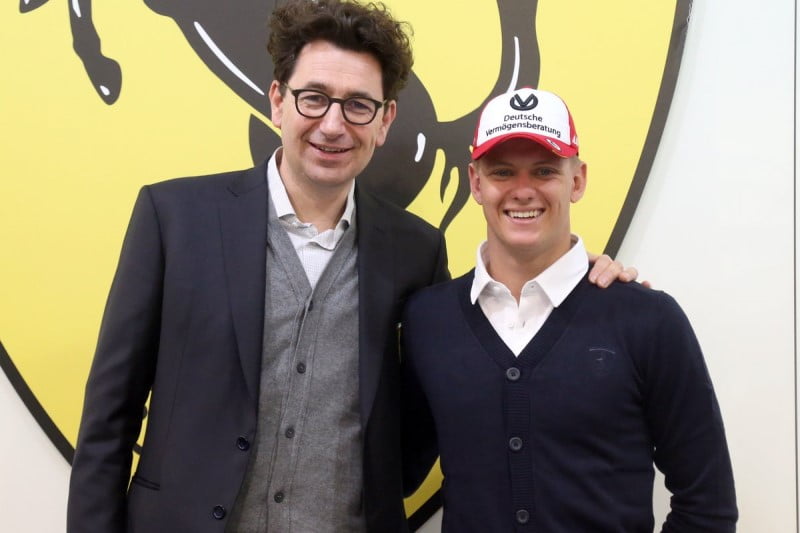 Once the ‘Mick Schumacher to Ferrari’ hype settles, tell us what year do you think Schumacher Jr. could end up racing for the Scuderia in Formula 1. By our calculations, it could be 2024 or around.

We’ve lost track of the number of times we’ve spoken to a “former” Formula 1 fan who told us that they stopped watching the sport after the great Michael Schumacher left Ferrari – a statement often accompanied with a whiff of nostalgia and proclamations of Schumacher’s greatness and of course, the controversies that came along with. In the years that followed, many great champions emerged from the shadows, most notably Fernando Alonso, Sebastian Vettel and Lewis Hamilton, but the league of lost Schumacher fans were not interested. Their loyalty remained with their legendary driver and not the sport.

I am thrilled that I will be part of the @insideFDA and also of the @ScuderiaFerrari Family. I will make everything to achieve my dream, racing in @F1. Ferrari has a big place in my heart and those of our family, so I am delighted on a personal level about this as well. #FDA #SCM pic.twitter.com/5nTDNxfJNs

Come 2019, and life seems to have come a full circle for Formula 1 and its fans. The formidable Schumacher name has joined forces with the Ferrari team once again, and the tantalising possibility of an encore of the greatest Formula 1 partnership of all times has become all too real. Maybe, this announcement will bring back Formula 1’s lost fans, crawling out of the woodwork in their fading scarlet t-shirts. In fact, for a sport that is struggling on multiple fronts, is Mick Schumacher the silver bullet that they so desperately need? He will appeal to Formula 1 puritans while also connecting with the younger fans that the sport is so keen on impressing.

The meteoric rise of Schumacher Jr.

‘Momentum’ is a wonderful feeling in the world of sport. And currently, not many drivers are a better example of what momentum can do to you in the world of Motorsport. Between the summer break of 2018 (July-August) and now (January, 2019), Mick Schumacher went from being a title contender in the much-coveted FIA European Formula 3 Championship to eventually being crowned champion and now a Ferrari Junior Driver starting with the 2019 Formula 1 Season.

Given the nostalgic links between the Schumachers and Ferrari, one would have expected this partnership as the obvious next step in the young Schumacher’s journey to becoming a Formula 1 driver. In fact, there were several hints along the way that gave away their close links even before the official announcement. For starters, Schumacher’s last few years in single-seater racing have been with the famous junior formula racing team, Prema; a team with close links to Ferrari and have often been the team of choice for their junior driver program. Charles Leclerc won his Formula 2 championship with Prema in 2017. The Schumacher-Ferrari link was further fuelled by Schumacher’s attendance at the post-season Formula 1 test with Ferrari in Abu Dhabi last year.

In fact, Mercedes’ Toto Wolff admitted interest in Schumacher at the FIA Gala in December 2018. But, he also said, “There is currently little space in our junior programme.” – the truth about Mercedes’ program given how Esteban Ocon has been forced to sit the year out in 2019 and Pascal Wehrlein had to be dropped from the program altogether due to the lack of a proper ladder (or structure) for a Mercedes junior driver in Formula 1. On the other hand, Red Bull Racing’s Helmut Marko denied having interest in contracting Schumacher to the junior driver program run by his team. “He was never on our radar,” Marko told Motorsport-Magazin, but he did admit that Schumacher’s momentum of winning five races on the trot (in September 2018) was “amazing”.

Ferrari: the right step for Mick?

Apart from the emotional considerations and from a career point-of-view, a Ferrari junior driver contract seems to be a step in the right direction for Schumacher for several reasons. First, it is Ferrari, the oldest and most-successful team in the history of Formula 1. Yes, they might not have won as many titles (actually they have won none!) as they would have liked in the last decade, but given Formula 1’s political structure, the chances of Ferrari being out of a championship fight are less. The same can be said about Mercedes and Red Bull Racing too, but the Mercedes’ lack of structure and Red Bull Racing’s impatience with their drivers make Ferrari the more secure option.

Second, the structure of Ferrari’s junior driver program given their partnerships with Sauber and Haas. It is understood that Ferrari could have a say to put at least one of their junior drivers in the cockpits of these teams. Leclerc benefitted from this in 2018 and Antonio Giovinazzi will do so in 2019. Along with Schumacher, the other drivers in Ferrari’s junior program will benefit from this ladder should they get their break in Formula 1. Unlike the promotion-happy Red Bull Racing, Ferrari are patient in picking their drivers for the main team and the presence of this structure allows them to carefully evaluate their talent without picking, dropping and re-hiring drivers, something Red Bull Racing has famously done in the last few years.

The details of Schumacher’s junior driver duties and development program aren’t made public yet, apart from his expected debut in this year’s FIA Formula 2 Championship. However, one would expect simulator experience and a couple of young driver tests to be a part this multi-year program with an eventual break into Formula 1 should Schumacher deliver to his targets. Schumacher’s previous single-seater experience (from 2015-18) shows that the German driver has often been stronger in his second season in the series, so a two-year program in Formula 2 wouldn’t come as a surprise. Given that the Formula 2 Championship is organised as a support series to Formula 1, this is the season where there will be an increase in exposure and scrutiny on Schumacher’s performances.

A Schumacher is back in the Scarlet Red stables! #Schumacher #Ferrari

Evidently, Schumacher Jr. is at a crucial point in his career. While he has proven that he has the speed and talent, the next few years will test him in his ability to deal with the pressure and expectation that comes with his legacy, and the humongous boots he has to fill. Formula 1 is no stranger to family legacies and famous last names (Verstappen, Rosberg, Sainz to name a few), but this is no ordinary situation. Whether we admit it or not, the metric to evaluate Mick Schumacher’s success will always be loftier than those of his peers. In a way, Schumacher Jr. will possibly experience firsthand what his uncle Ralf Schumacher went through during his entire Formula 1 career.

But how soon before we see a Schumacher back in Formula 1? Frankly, Schumacher would need to have a Leclerc-esque (okay, or even George Russell-ish) year in Formula 2 in 2019 for him to receive a promotion to Formula 1 in 2020. Of course, this would mean either Kimi Raikkonen hanging up his boots a year earlier than planned or Antonio Giovinazzi making way by dropping off or receiving a promotion himself to race for the Haas F1 Team. However, it would be one thing for Schumacher to get into Formula 1 and another altogether to land up in the cockpit of a Scarlet Red racing car. From the list of previous junior drivers (Jules Bianchi, Charles Leclerc, Lance Stroll, Antonio Giovinazzi and Sergio Perez) it is only Leclerc who made it to being a Ferrari driver, while one would expect that Bianchi would have been on this list too. That said, it wouldn’t be out of reach for the tifosi to dream of a Schumacher-Leclerc pairing at Ferrari in the time to come!

For the Schumacher-Ferrari magic to re-capture the hearts and imagination of Formula 1 fans world over, the team and driver will have to deliver more than just what their combined brand love stands for. After all, with every great legacy comes the responsibility of keeping it intact.