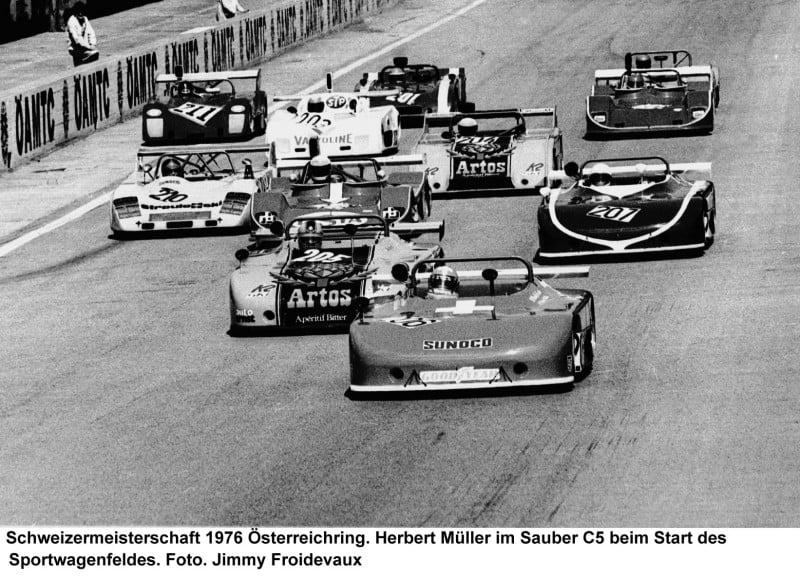 As someone who grew up following Formula 1 in the 90s, the navy blue-coloured Sauber cars with prominent Red Bull and Petronas branding were hard to miss. Also hard to miss were the solid technical partnerships that Sauber attracted along the way and of course, the racing talents it launched in Formula 1. The team’s underdog status attracted many fans – I vividly remember cheering loudly for Sergio Perez in the Sauber as he almost chased down Fernando Alonso’s Ferrari for victory at the 2012 Malaysian Grand Prix!

This is a year of milestones – as Formula 1 celebrates 70 years in 2020, Sauber too celebrates 50 years in Motorsport. Alfa Romeo, the flagship brand under which Sauber Motorsport currently competes in Formula 1, celebrates 110 years of existence.

I had the unique opportunity to interview Peter Sauber, the architect of Sauber Motorsport, who entered Formula 1 after repeated successes in sports car racing championships through the 70s and 80s. Today, the motorsport veteran is 76-years-old, but retains his immense passion for motorsport and Team Sauber – he usually watches races in front of the television and attends three to four races a year.

Peter Sauber’s name is synonymous with the team and its glory over the years. Looking back on the journey, Sauber recounts, “If I were to describe the 50 years in detail, you could fill a book with it. If I put it in a nutshell, I have to say – it was fantastic. If you can do something for 50 years that is actually not doable in Switzerland, and after 50 years you have a modern factory with 500 employees, that’s great!”

To bring historical perspective to Sauber’s story, it is crucial to note that most common forms of motorsport were and are still banned in Switzerland – as a reaction to the Le Mans disaster of 1955, one of motorsport’s worst catastrophes. The one form of motorsport permitted was hillclimbs – a very popular format that attracted participation from some of the most-iconic car manufacturers in the world.

It was at the 1970 Swiss Hillclimb Championship when Sauber raced the C1 – his first car that was self-built in his parents’ basement. Sauber’s journey from the basement to the Formula 1 paddock is a tough-to-achieve feat in today’s era. He reflects, “Already back then it was ‘mission impossible’ in Switzerland, and it would be even more impossible today.”

Explaining his team’s successes through the 70s and 80s. Narrates Sauber, “The first highlight was my victory in 1970 with the Sauber C1 in the Swiss championship for sports cars. In 1976, Herbert Müller took overall victory in the international Interseries with the Sauber C5. In 1988, Sauber became the official Mercedes Benz factory team. With this, I brought back the German manufacturer into the folds of international motorsport after an absence of 33 years.” Indeed, it was the Mercedes partnership that turned heads and powered Sauber to successes in some of the most-iconic races in the world.

1989 was the most successful year for Sauber’s sports cars with the double victory at the 24 Hours of Le Mans as well as winning the Team and Constructors’ World Sports Car Championship. Sauber rates this as one of the most underrated landmarks in the team’s 50 years of being in motorsport. He explains, “Neither the motorsport industry nor the population in Switzerland realised what an achievement it had been, to build a complete car in a small factory in Hinwil and to win the most important race in the world together with Mercedes.”

A huge milestone for the team following this was entering the world of Formula 1 as a privateer team in 1993. That year, Sauber raced with ‘Concept by Mercedes-Benz’ stickers on their cars before officially entering as Sauber-Mercedes in 1994. For those celebrating Mercedes’ dominance in Formula 1 in this era, Sauber’s role in bringing the manufacturer back into motorsport and Formula 1 deserves much credit.

In 1995, Mercedes split with Sauber to forge their famous and historic partnership with Mclaren. “After four years of a very good and very successful cooperation in the World Sports Car Championship and the initial goal of going into Formula 1 together, I obviously regretted this parting of ways,” admits Sauber.

He further explained the reasons behind separation, saying, “At the end of 1991, the Mercedes management board decided against entering Formula 1 as a constructor, but offered to supply Sauber with engines in 1993. But I had to find the resources (sponsors) to fund the team myself. I managed to do that with Red Bull and Petronas, but unfortunately it was already too late; Mercedes had already looked around and found another partner by then.”

Sauber as a launchpad for drivers

Earlier this week, Sauber announced the formation of the Sauber Academy, the team’s new driver development program. This announcement seemed to formally recognise Sauber’s long-standing contribution to the sport as a launchpad for young and talented drivers such as Michael Schumacher, Kimi Raikkonen, Robert Kubica and Charles Leclerc to name a few. Sauber candidly admits that initially the team was plain lucky to launch the right talent. He explained, “When we founded the Sauber Mercedes Junior Team in autumn 1989, we made a commitment to sign up the first three of the German Formula 3 Championship. We managed to snap up a really good batch of drivers. For two years, we had Karl Wendlinger, Heinz-Harald Frentzen and Michael Schumacher under contract and got all three of them, directly or indirectly, to Formula 1. With that, we created a name for ourselves.”

Over the years, Sauber was also to further build on this position. Peter elaborates, “As a midfield team in Formula 1 with sponsors such as Red Bull and Petronas, we were a good address for young drivers and always received interesting applications. Choosing the right one was not always easy. As an example, I would like to take the case of Kimi Raikkonen. Engaging Kimi was my gut feeling and something that was rationally not comprehensible.”

What was it about Raikkonen that caught his eye? “For the 2001 season we needed a second driver alongside Nick Heidfeld. Someone drew my attention to Kimi Raikkonen and I gave him a chance with a test in Mugello. It is not easy to describe what it was about Kimi that impressed me. For sure he was quick; especially for a rookie sitting in a Formula 1 car for the first time. But that was not all. It was his very special personality, his body language, which fascinated me.”

Raikkonen went on to debut in Formula 1 with Sauber in 2001, a move which made headlines. After all, the young Finn had competed in only 23 single-seater races before testing and eventually racing for Sauber. Hiring Raikkonen proved to be the correct decision for Sauber as the Iceman and Heidfeld raced Sauber to fourth in the championship, the team’s then best-ever since joining the sport.

However, hiring Raikkonen also cost Sauber their coveted partnership with Red Bull. Sauber is pragmatic in his view of the Red Bull – Raikkonen tradeoff. He explains, “You have to look at the two topics –  Kimi Raikkonen and Red Bull independently. Red Bull was a fantastic partner for us. However, it was always Dietrich Mateschitz’s goal to have his own team. Sooner or later, he would have taken this step. Dr. Helmut Marko, Red Bull’s motorsport consultant, had always promoted motorsport talent early on. This included Enrique Bernoldi, who they would have liked to place with us as a fixed driver. In my view, he never had the calibre/class of a good Formula 1 driver.”

A Taste Of Formula 1

Apart from crediting Sauber for launching some of the sport’s most-celebrated talents over the years, the team also needs to be credited for introducing new brands to Formula 1. Mercedes, Red Bull and Petronas’ all had their first association in Formula 1 through Sauber. Sauber is humble in accepting the praise. He shares, “When I try to find the key that opened the doors for me to Mercedes in 1984, and to BMW 20 years later in 2005, I think it was the performance of my small, reputable company in Switzerland that helped me. We always stood for rock solid, fair values. Somehow that also made possible my access to Ferrari, Red Bull and Petronas.”

The brands Sauber introduced to Formula 1 went on to dominate the sport – but much after their partnership with the Swiss team ended. Does Sauber have any regrets? He explains philosophically, “If you look back at your life, most of us will always find one or two things we wish we had done better. But that is not possible. And that’s why I would do the same thing all over again, and be happy with it – again.”

As a former team owner, I was excited to quiz Sauber about Formula 1’s latest changes – the budget cap, sliding scale aero regulations and more. Sauber agrees that the rule changes are not timely enough, opining, “Of course they are too late and not consequential enough. It’s been 27 years since I entered Formula 1 in 1993. The regulations have changed constantly during this time. The topics have remained more or less the same (safety, costs, appeal for viewers as well as automobile manufacturers).”

What about 2022? “I will let myself be surprised by what results the changes bring about in 2022,” signs off Sauber.

This interview was conducted in German. Special thanks to Gunjan Shah for helping with all the translations to English.