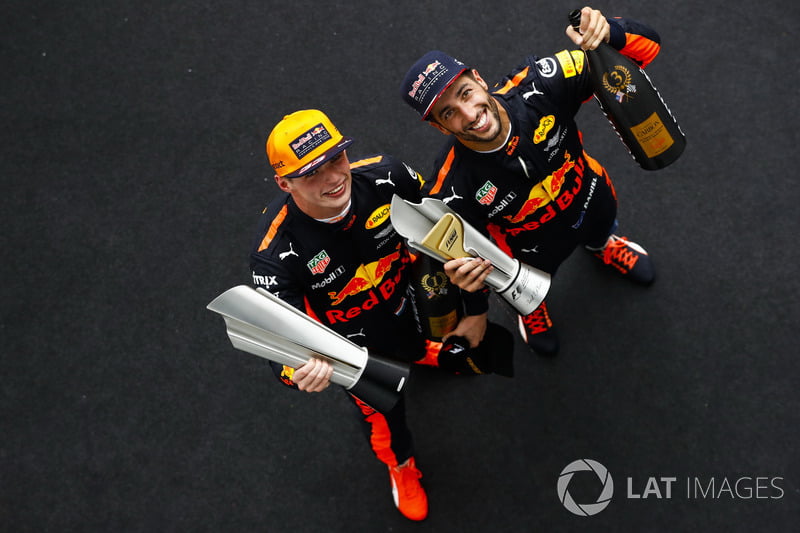 Max Verstappen, the season’s 5th driver to win a race also registered Red Bull Racing’s first-ever victory on merit in the hybrid-turbo era. It’s taken Red Bull Racing and Renault three and half seasons to get here! Like Mithila pointed our earlier, all of Red Bull Racing’s previous victories have come under unusual circumstances – Mercedes cars crashing out, or the race leader running into some sort of issues.
In Malaysia, the race was Ferrari’s to lose and they lost, but full marks to Red Bull Racing for picking up the race win. Of the top team drivers, Kimi Raikkonen is the only driver who is yet to register a win this season. Chances are slim that he’ll win one before the end of the current season!
Mithila Mehta and I have partnered with Firstpost for the 2017 Formula 1 Season and will feature in their Firstpost Pole Position videos all through the season. Basically, we’re now available in text, audio and video!

I am hoping that Red Bull Racing’s new found pace and form interferes with the Hamilton vs. Vettel title battle. It will make for interesting racing and unexpected points gain or losses. A fast Red Bull Racing car will worry Mercedes more than Ferrari and surprisingly enough, in Singapore and Malaysia, the Mercedes cars were only the third fastest in race trim.

While there’s no data to support my question, I wonder if Ferrari have traded reliability for speed. Given their position in the Drivers’ Championship, it wouldn’t be uncertain to think that they may have. Sometimes such risks pay off, but in Malaysia, it clearly didn’t. There’s a random conspiracy theory about Ferrari swapping Vettel and Raikkonen’s power units (because both drivers had similar issues on alternate days of the weekend), but I doubt the FIA would’ve allowed them that. Did the new air-flow upgrade that was heavily shared on social media cause issues for Ferrari?

I also read MB’s post on the Sky Sports F1 website, where he’s accused Sebastian Vettel’s arrogance and attitude for getting in the way of his title. While MB’s insights and points of view are spot-on (otherwise and in this post), there are times where his writing almost-blatantly hints towards appeasing the Hamilton-loving British audiences. There’s nothing wrong in playing to your audience, but I still believe that ‘with great talent, comes great temperament’ (specific to Vettel’s case).

Did The Success Of Singapore Cause Malaysia’s F1 Exit?

In the case of Mercedes, Bottas’ lack of pace compared to Hamilton’s could mean two things – Hamilton is capable of driving faster than than the package possibly can. And second, did Mercedes’ upgrades fail to work on Bottas’ car? It is interesting to see how Ferrari and Mercedes are pushing to the absolute limit of their in-season development program every single weekend to stay ahead of each other.
Finally, good debut for Pierre Gasly, but what about Daniil Kvyat? Will he be retained for 2018, or will Red Bull Racing give another junior driver a break, and if so, who would that driver be? From what I follow (and it is usually a little only), no other Red Bull Racing junior is ready to break into Formula 1 and Honda’s protege doesn’t have enough points for a super-license. In which case, can Red Bull Racing bring back Sebastian Buemi?

Buemi’s won everything outside of Formula 1 (after he was dropped by Red Bull Racing) and given the possibility that both Verstappen and Ricciardo could depart at the end of 2018, shouldn’t Red Bull Racing see if another senior driver can be brought back to the sport? At the moment, if both seats go vacant in Red Bull Racing, Sainz is the only senior driver available with ample experience under his belt. Gasly could be given a Verstappen-style promotion too, if he proves himself in the next few races and in 2018, but there’s nothing to suggest yet that Gasly could go the Kvyat way too.
Lastly, Mclaren would’ve been pleased to see a Renault-powered Red Bull Racing car on the top step of the podium in Malaysia. While Vandoorne’s 7th was ahead of the works Renault team cars, that their future engine partners could help them win races would surely be pleasing. I am excited at the prospects of a Mclaren vs. Red Bull Racing in 2018!