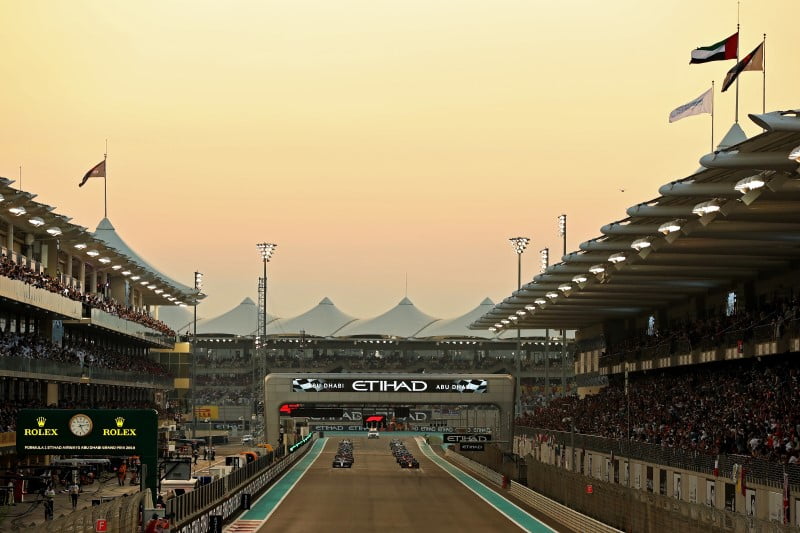 Interestingly, the unpredictable results from the last race in Brazil was the reason why we had these exciting face-offs to cheer in Abu Dhabi. Here’s a list of all battles that were fought and won in the 2019 Abu Dhabi Grand Prix.

Verstappen vs Leclerc — fight for 3rd

The fight for the third place was between Red Bull Racing-Honda’s Max Verstappen and Ferrari’s Charles Leclerc. By retiring from the last race in Brazil, Sebastian Vettel ruled himself out of this battle. Coming to Abu Dhabi, Verstappen led Leclerc by 11 points in the drivers’ championship — a gap that worked in his favour. However, Verstappen downplayed the importance of third place in the championship, saying, “I think it’s always nicer than finishing fourth or fifth, but looking back in 20 years’ time and seeing that you were third in the championship wouldn’t really make me very happy. I think we are all here to win and we are all here to fight for the title. I think it would be nice after the weekend to be third, but in 20 years’ time, I don’t think it will do much.”

Despite Verstappen’s stance, there is no doubt that Honda and Red Bull Racing (in that order) will celebrate finishing ahead of both Ferraris in their first year of partnership.

This has been the best season of @Max33Verstappen‘s #F1 career, earning him P3 in the championship pic.twitter.com/DrzYw44OVL

On the other hand, Leclerc was looking to stamp his ‘arrival’ in the sport by grabbing third place for himself — especially against the highly rated Verstappen. Leclerc shared, “It is always nice to finish the season on the podium. I will give it all even though 11 points are quite a bit to recover in one race. But I will give it all and will be nice to finish my first season with Ferrari on the podium.”

The fact is that Ferrari were favourites to win both titles in 2019 after the pre-season tests — a challenge that dissipated into a whimper as the season progressed.

Sainz vs Gasly vs Albon for sixth place

There was a three-way battle for sixth place in the championship — Pierre Gasly and Carlos Sainz Jr. were tied at 95 points while Albon was 11 points behind with a tally of 84 points. All three drivers have secured contracts for 2020 — so this battle was more about glory and earning the respect of the paddock.

Mclaren’s Sainz has been the surprise of the season — scoring points in 13 out of 21 races, including a podium in the last race in Brazil. Unsurprisingly, he was fighting for finishing 6th in the drivers’ championship against Red Bull Racing’s Alexander Albon and Toro Rosso’s Gasly. Yes, it was the mid-season swap at Red Bull (between Gasly-Albon) that brought him in contention, but there’s a lot of bragging rights for Sainz in beating one, if not two, drivers contracted by his former employer. Revealed Sainz, “I think we’re as confident as we can be but at the same time you’re obviously cautious, you can never know what’s going to happen in the last race. I already consider it a bit of a success, to be fighting for P6.”

Gasly had a tumultuous season with a shock mid-season demotion. Securing sixth place in the championship would be a vindication of sorts – and let the Frenchman show the paddock that he has the drive and talent to succeed. He shared, “I think it makes it really exciting, coming into the last race of the season with something to play for in the championship. Carlos and McLaren have been fast all year long, consistent, so we expect it to be tough and it will be our job to execute the perfect weekend to hold on to that sixth place until the end.” As for Albon, scoring 6th place would be impressive — he would have scored more championship points this season than Gasly and Sainz in just his 9 races at Red Bull Racing.

It was a last lap battle for 10th place against Renault’s Nico Hulkenberg that Sainz won and managed to score the extra point to beat Gasly!

Mclaren comfortably sealed the unofficial ‘best of the rest’ position (4th place) in the constructors’ championship. However, there was a battle that was yet to be settled between Renault and Toro Rosso for 5th place. Gasly’s unexpected second place finish for Toro Rosso in Brazil a fortnight ago brought the Red Bull B-team to within 8 points of Renault. Could Toro Rosso, who will be renamed to Alpha Tauri in 2020, beat Renault to register their best-ever finish in Formula 1? Toro Rosso is the only mid-field team to have scored a podium with each driver in 2019 (Kvyat’s 3rd place in Germany and Gasly’s 2nd place in Brazil) while Renault are yet to score a podium in the hybrid-turbo era that commenced in 2014.

Renault failed to score a point in Abu Dhabi, while Toro Rosso scored points with Daniil Kvyat’s 9th place finish. Gasly’s race ended on the opening lap after contact with Racing Point’s Lance Stroll. At the end of the season, the two teams were separated by just 6 points – but their standings may have been different had Gasly run a normal race.

There was a fight brewing for 7th place between two teams that are technically in their first season in Formula 1 — Racing Point as Force India’s new avatar and Alfa Romeo, who returned to the sport after their departure in 1985. Racing Point F1 Team was in 7th place in the constructors’ championship with 67 points while Alfa Romeo was only 10 points adrift in 8th. While both teams haven’t had a season to boast of, Alfa Romeo’s 22 points haul in the race in Brazil has certainly brought them into contention in Abu Dhabi.

The last season when Sauber finished in 7th place was back in 2013 — with the team finishing in lower positions in the seasons that followed. “It’s a shame that we have fallen down as a team,” summarised Alfa Romeo’s veteran driver Kimi Raikkonen. As for Force India, the team finished in 4th place in the last two seasons (2017 & 2018). The last time they finished in 7th place in the championship, it was back in 2012. The constructors’ championship is the main business for the Formula 1 teams — one where they earn money from. So expect them to fight tooth-nail for every position that can be gained.

In the fight for 10th place in the drivers’ championship were Perez and Norris and the two battled together in the closing stages of the race in Abu Dhabi. Perez’s tyre management (he went 37 laps on the medium tyre) brought him into contention and he pulled off 5 overtakes in the last 17 laps – including a last lap move on Norris. In the end, it was Perez who finished ahead of Norris after a hard-fought battle at the Yas Marina Circuit.

“One of the best moves of my career” – @SChecoPerez 👀 👏#AbuDhabiGP 🇦🇪 #F1 pic.twitter.com/3JhsboZWO3

Even though Norris lost the 10th place in the drivers’ championship to Sergio Perez, it was the qualifying battle against his team-mate Sainz that he won in the session on Saturday. After 21 races, Nando out-qualified Sainz 11 times to 10 – a much-worthy position to finish in one’s debut season.

Williams’ George Russell is the only driver among the 20 to have not scored a single point this season. There were concerns around his fitness in the days leading up to the 2019 Abu Dhabi Grand Prix, however, the young British driver did drive in both free practice sessions on Friday. Although an insurmountable task, if Russell were to score a point in the race on Sunday, 2019 will be only the second season after 2018 to see all competing drivers score at least one point through the season.