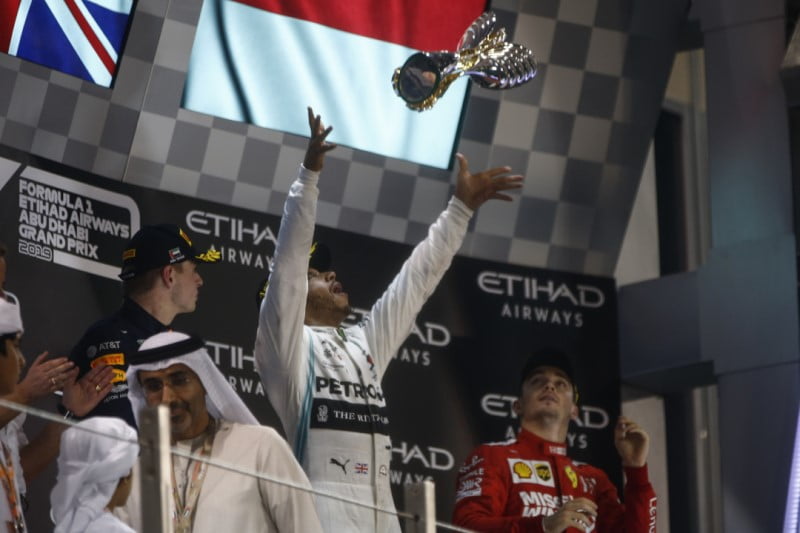 Formula 1’s season finale at the 2019 Abu Dhabi Grand Prix may not have been as exciting as the previous races, but the performances and results of the race mirrored the trends from the season.

Lewis Hamilton dominated the weekend – clinching his 88th pole and scoring his 84th career win. Red Bull Racing and Max Verstappen finished second-best, while the Ferrari struggled to deliver a clean racing weekend for yet another race this season. Valtteri Bottas fought from back of the grid to finish 4th while Alexander Albon, the other Red Bull Racing driver, managed 6th place.

The first 20 laps of the 2019 Abu Dhabi Grand Prix offered a glimpse of how current-day Formula 1 would be minus the DRS. Thanks to a data server error, the DRS (or drag reduction system) failed to activate on all cars forcing drivers to actually work hard to overtake. One must admit that it was a treat to watch drivers plan their overtakes rather than perform the act via the flick of a switch!

As the driver who holds the record for the maximum number of pole positions in Formula 1, Hamilton’s fifth pole position of the season came after a nine race gap – the largest since he joined Mercedes in 2013. After starting from pole, Hamilton disappeared into the distance to score a lights-to-flag win in Abu Dhabi. At the chequered flag, he finished a comfortable 16 seconds ahead of second-placed Verstappen. It would be safe to say that Mercedes-Hamilton went unchallenged in Abu Dhabi and scored their most-dominant win of the season. The last time Hamilton won a race with a similar victory margin was at the 2019 Hungarian Grand Prix.

The race win in Abu Dhabi was also Hamilton’s 11th win of the season – matching the total number of wins per season from 2014 and 2018, an indication of his dominance in the hybrid-turbo era. Also, with 413 points in the Drivers’ Championship, Hamilton registered his highest points score in a season ever, crossing 400 points for the second season in a row.

In his 250th race, @LewisHamilton won from pole for the 50th time in his career 🎆#AbuDhabiGP 🇦🇪 #F1 pic.twitter.com/IpD39IM80d

“I’m just so proud of everyone. I’m so grateful for everyone who has continued to push. I felt great out there today and I feel so good right now. It’s like, ‘there are no more races?’ I feel like I’m at my best of the year right now, like I’ve got to keep going and now we have got to stop? Anyway, we stop on the right foot, and I hope we start on the right foot again next year,” said an excited Hamilton following the win.

Bottas, the other Mercedes driver, started his weekend on the back-foot after two unscheduled changes to his power unit meant that he started from the back in 20th place. The Finn, who finishes the season in 2nd place in the Drivers’ Championship, drove well to finish in 4th place – a position ahead of Ferrari’s Sebastian Vettel who started 4th! This despite the fact that the lack of DRS in the first 20 laps would have hampered Bottas’ attempted charge through the field.

The second storyline from Abu Dhabi was Verstappen vs. Leclerc – as they battled for 3rd place in the Drivers’ Championship with 11 points separating them. After qualifying 2nd (Verstappen) and 3rd (Leclerc), the two young drivers battled for the two podium positions all through the race. At the start, Leclerc jumped Verstappen on the opening lap thanks to a tow and maintained second place till Verstappen retook the position from the Ferrari driver later in the race despite suffering from engine issues throughout the race.

At the flag, Verstappen finished 26 seconds ahead of Leclerc, who pitted twice instead of the much-preferred one stop. In the end, the Red Bull Racing driver claimed his career best finish in the Drivers’ Championship and gave Honda much to cheer about by finishing ahead of both Ferrari drivers. Said Verstappen post-race: “To be P3 in the championship was a nice ending. We are all working hard, but good to take some time off and be with family and friends and come back stronger next year.”

As with their lack of pace to challenge Mercedes and Red Bull, Ferrari’s repeated strategy errors aren’t a surprise either. In Abu Dhabi, it all started in Q3 of qualifying after Charles Leclerc missed his final run thanks to a slowed down queue in the dying moments of the session. After facing similar issues in China and Italy this season, one would’ve hoped for the team to sort out a basic math related issue. The driver’s urge to leave their final run to the last available second is understandable, but one does wonder how different the track conditions would be if they chose to start their final runs with 20-30 seconds left on the clock. Obviously, conventional logic confirms that missing a planned run is far worse than registering a slow run!

Come race day, the FIA Stewards found an irregularity in the quantity of fuel in Leclerc’s car and the quantity Ferrari reported they had fuelled car #16 with. The FIA issued a directive to investigate this issue post-race – one which resulted in a €50,000 penalty for 4.88kgs of extra fuel in Leclerc’s car. Thankfully for Ferrari, Leclerc kept his podium finish – one that he earned by keeping Bottas at bay in the final stages of the race.

Ferrari’s bad performances extended to their pit-stops too. The team pitted Leclerc much earlier than the other medium-tyre drivers – a decision that forced him to pit for the second time later in the race. While Ferrari’s decision puzzled many, the decision could have been taken due to excessive tyre wear for Leclerc. In fact, Vettel, who opted to run a soft-hard strategy (different from the other front runners), pitted on the same lap as Leclerc. The Italian team opted to double stack their drivers given the time gap available to them.

However, the team fumbled while servicing Vettel’s car – a mistake that cost him nearly 5 seconds of stationary time and track position behind Hulkenberg and Bottas. Vettel’s podium chances, however slim they may have been, vapourised after the pit-stop error. The Renault-Ferrari battle reminded fans of the 2010 Abu Dhabi Grand Prix when Fernando Alonso (also with Ferrari) failed to get past Vitaly Petrov (in a Renault) – a move that cost the team the Drivers’ Championship. From the top-6 runners, both Ferrari drivers were the only ones to opt for a two-stop race. Vettel’s time loss in the first pit-stop also meant that Ferrari were unable to use him strategically to aid Leclerc’s fight against Verstappen for second place. In all, the 2019 Abu Dhabi Grand Prix offered a glimpse of how out-of-shape Ferrari has been for most of 2019.

There were two battles brewing in the final few laps of the race, both that would have an impact in the Drivers’ Championship standings. The much-hyped Sainz vs. Pierre Gasly vs. Alexander Albon for 6th place saw Gasly omitted from the equation on the opening lap itself after his car suffered damage from a collision with Racing Point’s Lance Stroll. As for Sainz, the conventional one-stop saw him run out of points – and a tie at 95 points each would award Gasly the 6th place on a countback. 13 laps before the chequered flag, McLaren decided to pit Sainz and switched him to the medium tyres. After chasing the Renaults and other rivals from 14th place after his stop, Sainz pulled off a breathtaking move on Hulkenberg on the last lap of the race to claim 10th place and score the extra point that came with it. As for Albon, a 6th place finish meant that he finished 8th in the Drivers’ Championship – four points behind Sainz.

“Very happy! The target this weekend was to finish P6 in the Drivers’ Championship and we made it happen. It wasn’t an easy race, with a lot of traffic in all the stints and having to start with the Soft (compound). We went for the two stops knowing it was going to put me in a delicate position to make it to the top 10, but also knowing it was my only chance. I managed to catch Hulkenberg right at the end and pulled off an overtake, on the last lap, that I will not forget. I’m very happy with my season and extremely grateful to every single member of the team. Thank you!,” said Sainz after the race.

The other battle that was settled on the last lap of the 2019 Abu Dhabi Grand Prix was for 10th place in the championship between Norris and Perez. Perez, who is known for his tyre management, drove the longest stint (37 laps) on the medium tyres and switched to the hard compound for the last 17 laps – during which he overtook five of his rivals. Norris, who started on softs, was one of the first drivers to pit and switch to the hard tyres. The Norris vs. Perez battle lasted for several laps to the end with the McLaren driver doing well to keep his much-experienced rival at bay. However, Perez pounced on the last lap to claim the better finishing spot in the race and championship.

The winter break between the last race of 2019 and the first test of 2020 is a little around 80 days – the shortest it has been in the history of the sport. However, Firstpost.com will bring to you specials over the period to keep you entertained till the on-track action returns.