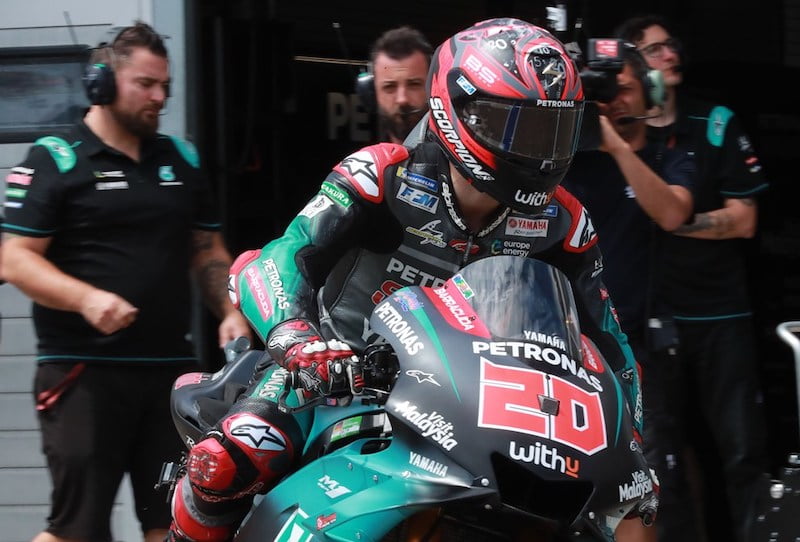 F1 and MotoGP made history on the same weekend as both series registered their youngest-ever front row starting positions at the Austrian Grand Prix and the Dutch MotoGP.

Twenty-year-old rookie Fabio Quartararo is making a habit out of dazzling qualifying runs. Only last month at Jerez, he claimed the title of MotoGP’s youngest-ever pole sitter. He was on pole a fortnight ago at the Spanish MotoGP – and repeated this masterclass to grab pole at the Dutch MotoGP while setting a new lap record. This earned Quartararo the honour of becoming the youngest-ever rider to claim back-to-back MotoGP poles. Vinales started alongside Quartararo in P2, with Alex Rins in P3 for Suzuki.

Meanwhile, several stalwarts had a dismal Saturday – Marquez failed to qualify on the front row for the first time in 2019 while the Ducatis could only manage P7 (Petrucci) and P11 (Dovizioso). Yamaha veteran Valentino Rossi struggled to a low P14 qualifying, his worst-ever qualifying result at Assen since 2006.

“Unstoppable”. That is the perfect word to describe Maverick Vinales as he pulled off a spectacular victory for the Yamaha factory team at the 2019 Dutch MotoGP. This is Vinales’ first victory since October 2018 – a much-needed result in an otherwise turbulent season. One of the biggest draws of MotoGP is the sheer competitiveness of the grid, and Vinales’ victory proves exactly that. He is the fifth race winner this season, and Yamaha is the fourth constructor to win. Speaking of Yamaha, they had an outstanding weekend with their riders topping every single session at Assen.

Championship leader Marc Marquez tried to pose a challenge, but was ultimately no match for Vinales and eventually finished in second place. Fabio Quartararo in the Petronas Yamaha SRT continued his top form and came home in third place.

Vinales admitted that Assen was one of his favourite tracks in the calendar – a fact that was evident for all to see as he decisively outclassed the rest of the field, including overtaking championship leader Marquez twice on track. 2019 has not been a good season for Vinales – due to a mix of racing incidents (he was knocked out thrice by other riders), errors and bad luck. Before Assen, his best finish was third – earning him his solitary podium appearance at the Spanish MotoGP. To add to the pressure, teammate Rossi had been consistently outperforming Vinales race after race. Vinales desperately needed a strong result, and Assen provided just that.

While Marquez had to settle for second place, he seemed to be content with the outcome, saying, “I knew that Yamaha were very strong in practice, so this is like a victory. Vinales deserves the win.” Marquez continues to lead the championship standings and is steadily pulling away from Dovizioso, his closest rival.

Quartararo may have been the hero of the Saturday qualifying session but it was during the race that his true heroics of grit and strength came forth. The young Frenchman was still recovering from the arm-pump surgery he had undergone a fortnight ago. With the help of some painkillers, he bravely held on and rode despite being “destroyed” by arm pain – and incredibly, still pulled off an outstanding showing. Quartararo led a MotoGP race for this first time, which he called the best moment of his life. He said, “I led nine or eight laps, but for me, it was a really special feeling, and I’m really grateful to be on the podium.” Pole-sitter Quartararo’s maiden MotoGP victory continued to elude him, but given his talent and form, it seems to only be a matter of time.

Ducati’s Andrea Dovizioso powered his way up to a respectable P4 finish, after starting way down in P11. Despite finishing off the podium and losing further ground to Marquez in the championship, Dovizioso could not have hoped for a better result. As was evident from Ducati’s performance on Saturday, they did not have the pace of the others. Dovizioso admitted that “In this track where you have to change directions at high speed, it is not the best for us and every corner is very long. It is not the best for our bike.”

Finally, a few special mentions: Franco Morbidelli in the other Petronas Yamaha SRT who equalled his best-ever MotoGP finish by pulling off a brilliant final chicane move on Petrucci which earned him the moniker, ‘the dark horse of Assen.’ This outcome is a great boost for Morbidelli who needs to rise from the shadow of his superstar teammate. Andrea Iannone of Aprilia Racing also earned his best result of the season in P10.

Rossi crashes out, trouble for Lorenzo

Even though it was a dominant weekend for Yamaha, things were far from ideal for Yamaha rider Rossi. Despite a poor qualifying run, the paddock was hoping for a miraculous comeback from the champion, especially given Yamaha’s form overall. However, that was not to be. Rossi failed to finish after a high-speed crash in the early stages of the race, where he also took out Honda rider Takaaki Nakagami. “It’s really a shame. The weekend was quite unlucky from the start,” admitted Rossi. He also took full responsibility for the incident saying, “Unfortunately when I fell, I also dragged him (Nakagami) down. I am really sorry about that. It was entirely my fault. It seemed like the race could have gone quite well, but it ended immediately.” Assen marks Rossi’s third DNF in a row – a trend that he will eagerly be looking to reverse by getting in some positive results.

If Rossi had an unlucky weekend, here’s a rider who seems to be having an unlucky season – Jorge Lorenzo, better known as the Honda teammate of Marquez. Ever since his move to Honda, it seems like the former world champion simply can’t catch a break. Just last fortnight, Lorenzo earned the wrath of the grid by causing a massive pile-up which took out several frontrunners. Unfortunately, Lorenzo was unable to redeem himself at Assen as he was ruled out of the weekend, as well as the upcoming German MotoGP, after fracturing two vertebrae during FP1. Perhaps having a few weeks recovering is exactly what the doctor ordered (pun intended) because the constant judgments, criticism and comparisons to Marquez seem to be doing him no favours. Can he come back stronger and hungrier to win? While Lorenzo was not replaced for the remainder of the Assen weekend, Honda will evaluate a stand-in for the upcoming MotoGP.

After all the action of the Dutch MotoGP, luckily fans only have to wait a week as the action shifts to Germany. Marc Marquez is a clear favourite, but if the 2019 season has shown us anything, it is that we will have a cracker of a race on our hands.