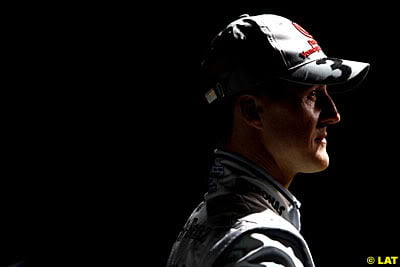 It shouldn’t be a surprise that I decided to launch my blog on 3rd January. After following Schumi for the last decade or more, there’s no doubt in my mind that he’s truly the best driver that modern day Formula1 has ever had.
May 2010, Turkish Grand Prix, I visited the Istanbul circuit and got a chance to bump into ‘God’ himself and I had to literally pinch myself. ‘Hey, what’s up!’ was what we exchanged before I wished him good luck for the GP and he wished me a good day! Not surprising that we didn’t speak much – after all we were in different team attire at an official F1 event!
So finally, after much pondering, here’s my F1 blog. This blog will largely be an aggregator of all my past, present and future columns on Formula1. I have been writing on F1 for nearly 5 years now and this blog will link all the work. With the Indian Grand Prix being held in this year (2011) the aim of this blog will be to address the Indian F1 audience and simplify an otherwise complex sport. I am hoping I succeed in bridging this gap.
I have to mention in this introduction the inspiration that Michael Schumacher has been to me. Here are my picks of a few of his best drives since he debuted way back in 1991. (only in order of my memory!)

There are many more that I can go on and on about – his victories in Spa, Monaco and the other circuits. Records that everyone can dream off – but only a few might get close to, let alone beat them.
91 race wins, 76 fastest laps, 1441 career points, 7 World Championships, 154 podiums and the unlucky no. 13, for the most GP wins in a season – are a few of his records. (inspiring, eh?)
On that note, I am hoping this blog does what I wish for it to do – i.e. simplify the world of Formula1 for Indian fans. Keep reading & keep commenting!

PS:  This introduction is dedicated to my cousin brother Sohil, who left for heavenly abode on 23rd December 2010. A Ferrari fan, Sohil liked Schumacher’s driving style and we did share a few good battles on track. The 2002 season however bored him out of Formula1. A budding film director, Sohil was a much better driver on the roads than me. Amen!