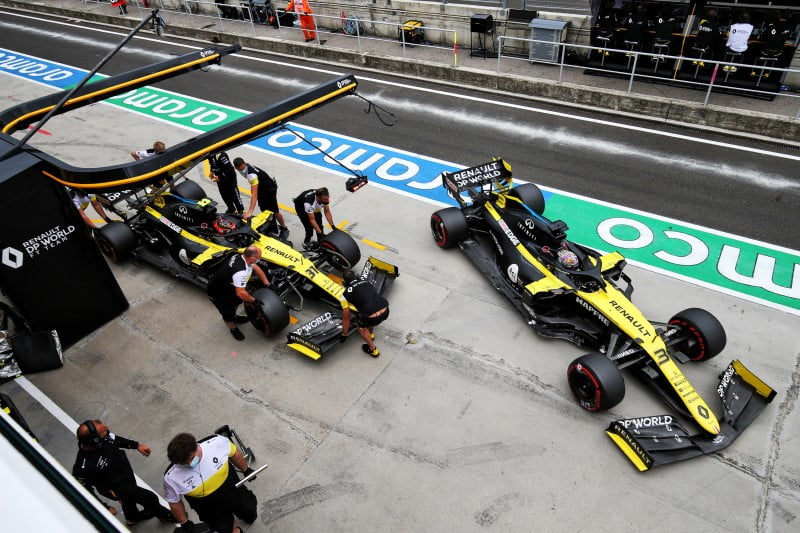 Renault could find it tougher to challenge for podiums and wins if F1 team alliances have a big role to play from the 2021 Formula 1 season.

Renault’s protest against Racing Point is more than just about the brake ducts. As Marcin Budkowski explained recently in his media briefing, it’s about F1 team alliances that Renault is seeking clarity on from the FIA. Understandably for Renault, they won’t have a customer team from 2021 – hence no ‘ally’ for them to fall back on, in terms of a competitive reference or exchanging performance data. We saw how Mclaren-Honda struggled when they went solo a few seasons ago. Every other works team has their own F1 team alliance in place for the near future.

Furthermore, I assume that with the sliding scale aero regulations set to debut in the 2021 Formula 1 season, F1 team alliances will only become more important. Could Mercedes who would presumably have lesser time to develop their package, collaborate to use Racing Point’s allocation? I’m not sure if F1 team alliances of such a manner can be policed by the FIA, but if this is permissible, Renault will only find it that much tougher to challenge at the sharp end of the grid. Let’s hope this isn’t bad news for Fernando Alonso’s return to Formula 1 and his third reunion with the team.

“We are just raising the issue. I think it’s something we want clarity on. We assume that the brake ducts and some parts of the Racing Point are a design from another team which is not legal within the regulations. It will be for the FIA and the Stewards to decide whether it’s the case. It’s an inspection that is done by the FIA and judgment that will be done by the Stewards. We are just putting the matter on the table and asking for clarity.”

“The main thing is that the brake ducts are an essential performance differentiator on the car. People think that brake ducts are little ducts to cool the break. But brake ducts today are an important aerodynamic performance element and on top of that they help control the temperature of the tyres, you know that temperature of tyres is pretty essential in Formula 1 nowadays. So they’re a performance differentiator – as much as a front wing or a diffuser. Additionally, there are parts of a brake duct that are internal geometries that you can’t see in a picture. So it’s difficult to copy from a picture.

We actually believe that they have received drawings and parts which they have used to build their car for this year. We believe this is not right. If this is not the case, we will see. We will see the investigation of the FIA and see what the Stewards have to say about this.”

What IF Racing Point Lose The Protest?

“Beyond this protest, it’s really the question of what model do we want for Formula 1 in the future? Do we want 10 independent teams competing with each other? Or do we want alliances of teams and your competitiveness is based on how many teams are in your alliance and how much information you are able to exchange. We believe that 10 independent teams is a better model for Formula 1 than alliances.”