An alt-F1 blog that explores the sport and business of Formula 1 + the home of the Inside Line F1 Podcast
Kunal's F1 Blog
Skip to content
Homepage F1 Features What About The Red Bull Young Driver Program? 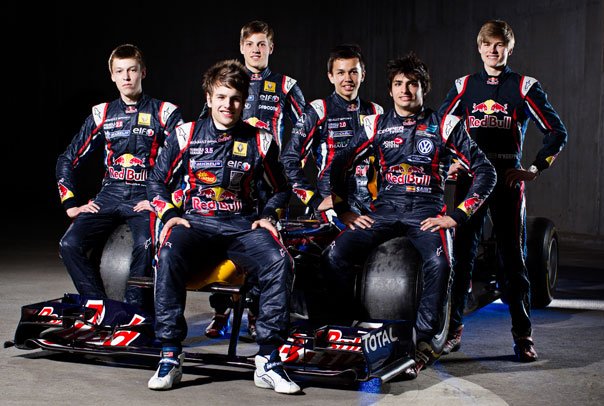 The 2015 Hungarian Grand Prix saw the most unexpected podium of recent times – Vettel, Kvyat and Ricciardo. Verstappen who finished an impressive 4th, made it a 1-2-3-4 finish for drivers who have graduated from the Red Bull Young Driver Program – one of their best advertisements till date? (Read: Hungar(y) Games)

That’s when I thought, what about the Red Bull Young Driver Program? Red Bull have threatened to quit Formula One if they don’t find a competitive engine, should that happen, what will they do with their impressive and much sought after driver training program? And worse, what about the drivers who are currently in the program? Questions not many have raised till date. (Read: Give Everyone Mercedes Engines)

Before I wonder further, let’s agree that a driver training program is most necessary – for drivers and for the teams. If you’re a driver, you’re almost always paying for your drive (karting, junior series and all the way up to Formula One). Yes, you could get scholarships and subsidized drives if you’re the series champion (or thereabouts) from the season before, but securing a 100% budget to go racing without support from corporate sponsorships or driver training programs is unheard of. Unless of course you’re investing family wealth! (Read: Formula One Can Be Cruel)

But such is the structure of the Motorsport economy. The higher you go up the ladder, the more expensive it gets. To pursue the sport professionally, serious money is involved and this is where the correct support is necessary. And if my research is correct, unlike other competitive sports, there’s almost no government support or grant for the drivers and the prize money in lower formulae is as good as non-existent. Despite this fact, the Motorsport economy is one of the well-funded ones. (Read: Formula One And Alcohol)

The biggest benefit that a driver training program offers an upcoming racer is the promise of a career in Motorsport – a possible seat in Formula One if the driver matches all the criteria. It is this promise and opportunity that the driver is then able to go and sell to potential sponsors and the media. (Read: Living The F1 Dream)

A quick look at history indicates that there have been driver training programs run by teams and sponsors and that many World Champions have graduated from such programs. Vettel, Prost (Elf), Schumacher and Hamilton are possibly the most successful ones on this list. (Read: Permanent No. 1 – Vettel vs. Schumacher?)

For teams, drivers are the least constant factor in the set-up, which is why they’re always scouting for newer talent. Till not very long ago, teams were on the lookout for the next Michael Schumacher and maybe now they’re hunting for the next Lewis Hamilton. If a talented young driver comes by, it is best to invest and buy in when the stakes are lesser and the cost is cheaper with the hope that the driver will perform consistently on his way to Formula One. The other lesser known aspect here is of the ancillary revenue that teams would make via a driver transfer. (Read: What Formula One Can Learn From Red Bull)

Most of the top teams in Formula One have a ‘driver program’ that offers funding, training and the opportunity to rise up through the sport. And to those who wonder about the economics of the academy, they’re either funded via separate sponsors or by the team themselves where a significant percentage of the driver’s earnings going back to the team to recover their investments or when the driver exits his contract to join another team. There’s no free drive in Formula One, of course! (Read: Formula One Is Funny)

If would be a shame if Red Bull quit Formula One. I penned my thoughts on their quitting in this post – ‘Thank You Red Bull Racing’ and I won’t be surprised if a business decision does force them to pull out. However, a bigger shame would be if their pulling out would impact the Red Bull Young Driver Program.

Red Bull could go back to the earlier avatar of their program where they sponsored drivers and teams in the sport, but that would be a step backwards for the energy drinks company and would seem a little out of sync with their ‘Gives You Wings’ philosophy. After all, for a young driver, the charm of a Formula One cockpit waiting in the wings wouldn’t just exist anymore. (Read: Red Bull Gives Us Wings)

Lastly, should Red Bull Racing quit and / or pull the plug on their driver program, the talented likes of Ricciardo, Kvyat, Verstappen and Sainz would be picked up by the current teams in no time. Now that is one driver market I would love to see play out – probably the silver lining in the dark cloud.

Here’s a re-plug of our previous episode of the Inside Line F1 Podcast on Jules Bianchi, a proud member of the Ferrari Driver Academy – ‘Godspeed Jules Bianchi #JB17’.

Since we’re talking Red Bull, here’s also a quick look back at the time we had Red Bull’s Ambassador for former Formula One racer David Coulthard on the Inside Line F1 Podcast – ‘At the Red Bull Show Car Run With David Coulthard’.

And finally, here’s the latest episode of the Inside Line F1 Podcast ‘Hungar(y) Games’ for your listening, sharing and commenting.