An alt-F1 blog that explores the sport and business of Formula 1 + the home of the Inside Line F1 Podcast
Kunal's F1 Blog
Skip to content
Homepage F1 Features 2013 Malaysian Grand Prix: Emotions, Tensions And Vettel Score A Win 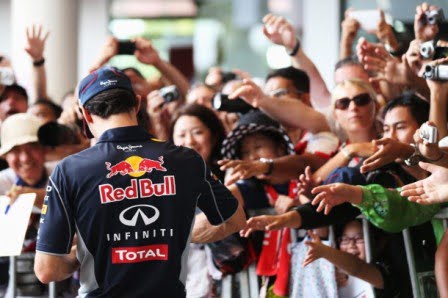 Phew! The 2013 Malaysian Grand Prix was one helluva race! As I write this blog post on my Formula1 blog, I have a feeling that this will be a long one. So I hope not to keep it too long and even if I do, I hope my loyal readers read all of what I am about to type! And, I am attempting a new format, so let me know how you like it! (Yes, change is the only constant and jazz!)

The weekend started with Sebastian Vettel clinching his second pole of the 2013 Formula1 season (Read: 2013 Malaysian Grand Prix Qualifying Report). However, for Rishi and me, it started a few days before when we recorded our pre-Sepang Formula1 Podcast in which we predicted that a new pecking order would be expected in Malaysia (Hear the 2013 Malaysian Grand Prix Podcast) and we did! (Woohoo!)

Lotus and Ferrari fought for honours in the 2013 Australian Grand Prix, whereas we had Red Bull Racing and Mercedes do so in the 2013 Malaysian Grand Prix. Vettel won a hard fought race, which didn’t seem hard fought after he was involved in a situation where he disobeyed team orders to not overtake Mark Webber. On the other hand, in Mercedes, Rosberg’s request to overtake Hamilton in the latter parts of the race was turned down. And Rosberg complied. Maybe Sepang did tell us the story of two teams and four drivers! And for all Formula1 fans, I would say a quite interesting start to the 2013 season.

In my view, Alonso should’ve waited, given that he’s one of the drivers who has always maintained that the race is never won on the first lap or the first corner. Somehow, this incident reminded me of the Alonso in his earlier days at Renault. Hasty and overconfident and while I know I am judging him on one move, I hope that this is only a one-off. In 2012, in a slower F2012, Alonso’s deficit to the competition was much less than what it is today! Some food for thought!

The 2013 Malaysian Grand Prix would be remembered more for the emotions and tensions post-race than for the good on-track action that we witnessed (WEB vs VET, HAM vs ROS, HUL vs RAI, BUT vs ROS). The tension in the Red Bull Racing garage was infact so high that they cancelled the post-race team photo to celebrate their 1-2 finish. While all of this seems like a soap opera, I would love to be a fly on the wall in the post-race debriefs at a few teams; Red Bull Racing, Mercedes and Sahara Force India!

While the 2013 Chinese Grand Prix may put test tensions and emotions yet again, what will be interesting to note is the patience levels of Formula1 fans as they wait an agonizing three weeks for the F1 circus to set shop in Shanghai!

However, Rishi and I will offer some respite to fans missing the F1 action by providing some of our own! Watch out for our podcast tomorrow!