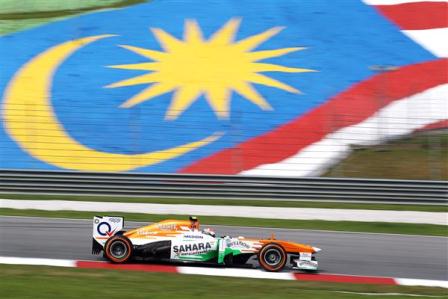 After Sebastian Vettel Claimed Pole Position In Australia From The Rain, predictions were that we would have a ‘New Pecking Order In Malaysia’ (Yes, click on those links!). I think qualifying this season is going to have two or three focus points.

First, the top mid or top team drivers who would face elimination in Q1. Second, tyre strategy and usage by the mid and top teams to avoid the Q1 elimination. Third, tyre usage in Q3, which could also mean non-participation.

Here’s how the 22 drivers fared in the 2013 Malaysian GP Qualifying:

A rain affected session meant that drivers had a choice of intermediate or wet weather tyres to use and all drivers preferred the inters. The bigger advantage for the top 10 was that they would have an open choice of dry tyre to use at the start of the race. Putting the immediate followers (P11 and P12) at a disadvantage!

Adrian Sutil was the only mid-field driver to have broken into Q3. Given his one season absence from the sport, it did look as though he was taking some time to get used to the mixed track conditions. He loves the rain in any case, but had it been dry, he would’ve probably qualified higher up the grid.

Mclaren prayed for rain before the session and their prayers were answered as the weather conditions helped their drivers qualify higher than what their car was capable.

Essentially the session where we see mid field teams try to punch above their weight and qualify for Q3. This session saw slight drops of rain which would’ve seen the late runners (Paul Di Resta, Grosjean) at a little disadvantage. The session once again confirmed that Sahara Force India had the pace to fight the top teams in Formula1. Ferrari, Mclaren and even Red Bull Racing struggled to match the pace Sutil set in this session. The Mercedes drivers claimed P1 and P2 (Rosberg ahead of Hamilton)

And wonder what were Red Bull Racing thinking! Both drivers struggled on their timed laps to get into the top 10. The best part of this session was Adrian Sutil claiming P1! (Woohoo!) And P1 to P16 were separated by a little over a second.

Not checked weather reports for Race Day tomorrow, but rain or no rain, Sepang will excite! Stay tuned as I head off for some afternoon sailing!