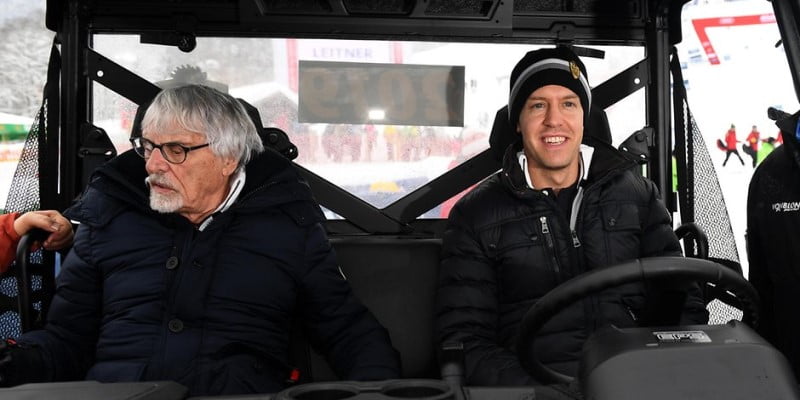 How soon before Sebastian Vettel’s F1 retirement is announced? Ecclestone thinks sooner rather than later.

An unlikely friendship or not, Bernie Ecclestone and Sebastian Vettel are known to be good friends. In which case, why would Ecclestone stir the controversial retirement pot for Vettel at a time when almost everyone is calling for it anyway? Is Ecclestone having with Vettel’s critics or did he just end up spilling the beans over Vettel’s future in Formula 1? Either way, let’s hope for one final championship flourish (or two!) for Vettel before he bids goodbye to the sport. (Read: Sebastian Vettel Trolling His Trolls)

In this week’s episode of the Inside Line F1 Podcast, we also talk about Fernando Alonso’s possible decision to not renew his current racing contract with Toyota and why that would be smart. If Alonso decides to return to Formula 1, which driver’s career could be at risk – Lando Norris or Carlos Sainz Jr.? Sir Jackie Stewart has been ‘very lucky’ to not have fan hate come towards him for claiming that Lewis Hamilton was very lucky to get the Mercedes seat. And of course, we look forward to the talking points from 2019 Azerbaijan Grand Prix and wonder if a mid-field driver will find himself on the podium 4th year in a row? Tune in!

0:00-3:00: Azerbaijan Grand Prix’s contract extended till 2023. How are circuits betting on Formula 1’s future when teams and drivers are so non-committal themselves?

3:00-6:00: Fernando Alonso’s decision to not renew with Toyota could offer a cue to his plans for 2020. What should he do? Is not re-signing with Toyota the correct decision? If Alonso returns to Formula 1, could it be at the cost of Lando Norris or Carlos Sainz Jr.’s future?

6:00-9:00: We discuss Sir Jackie Stewart’s assessment on Lewis Hamilton being ‘very lucky’ to have a Mercedes seat. We think Sir Stewart has been ‘very lucky’ to not have too much fan hate come his way!

12:00-15:00: Is Mattia Binotto actually overburdened at Ferrari? The ONE area where Charles Leclerc has had to work extremely hard to match Sebastian Vettel

18:00-21:00: Is Baku the new Spain for Formula 1 teams to bring upgrades? How will Mercedes deal with Valtteri Bottas’ early contract extension talks?

21:00-end: Can Renault switch from talking of the future to talking about the present? Moments in Time with Lucien + predictions!