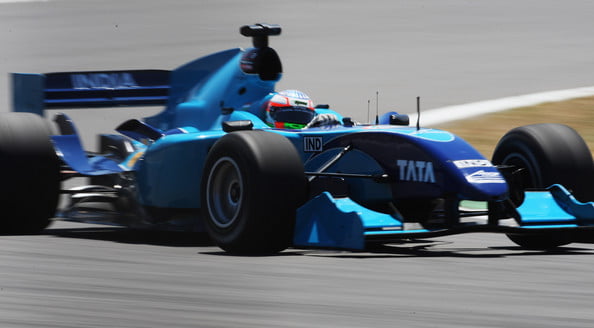 So Narain Karthikeyan is back in Formula1. But let’s also not overlook the fact that TATA Group is back as a sponsor too. As Narain’s long term sponsors, the TATA Group logo should be prominently displayed on the 2011 HRT challenger – after all they are funding his seat! HRT has accepted that Narain is a pay driver. (whether pay drivers are good or not – I will put forth my views later; but do read F1 2011: Year of the Pay Driver? that I penned on the Sportz Power network)

Tracing TATA’s association in Formula1, my mind goes back to the 2005 F1 season when the Group backed Narain’s F1 debut and therefore debuted themselves in F1 as a team and driver sponsor.

When Narain progressed to the WilliamsF1 team as a test driver in the 2006-07 season, the TATA Group followed the Indian racing ace, thereby showing their commitment to Narain and his racing talent. (Do note: they departed from F1 when Narain decided to pursue racing in other categories).

TATA Group invests in Motorsport via its brand TATA Racing of which Narain has been an integral part. They have supported other Indian racers as well (Karun Chandhok), but have been most loyal with Narain. They have been his personal sponsor since his junior racing days; an association going back to his World Series by Nissan debut.

TATA’s association with Formula1 does extend beyond Narain. TATA Consultancy Services (TCS) has a service provider agreement with Ferrari and they help write engine code for their road and racing cars. This association has been on-going since the 2004 season and has been independent of their driver or team sponsorships.

TATA is also a service partner with the Force India Formula1 team via its Computational Research Laboratories (CRL) based in Pune, India. The supercomputer based is one of the fastest in Asia and the exclusive deal offers the Indian F1 team automated computational fluid dynamics or CFD solutions which help the team improve aerodynamic efficiency of their F1 cars.

That TATA is back in F1 as a sponsor is a good sign. The India quotient in Formula1 will be the highest ever in 2011 – with two Indian drivers (hoping Karun gets a drive) and of course an Indian racing team. The presence of TATA is a strong indicator and motivator for other Indian multinationals to explore F1 as a sponsorship platform.

While TATA has been active in the top flight of racing, they stayed away thus far from committing too much to Indian Motorsport. Similar to their offering in the passenger car spectrum that ranges from the world’s cheapest 4 wheeler Nano, to one of the best luxury cars in Jaguar, I am hoping the TATA’s invest in Indian Motorsport as well as they have in Formula1. This move will not only back their association with Narain and F1, but also help them build a pool of drivers who can then take over whenever Narain decides to hang his boots.

Year 2010 has been one of the best for Indian Motorsport. With Karun Chandhok debuting in Formula1 with HRT and Force India notching their best constructor’s finish ever, motorsport has been making inroads into India’s sporting mind. Back this up with the arrival and launch of the inaugural VW Polo Cup and the Amaron Karting Challenge running a successful season 3, the stakes are only looking brighter.

The FMSCI has recently announced its intention to nationalise other forms of racing such as drag racing, motocross, autocross, etc. which is great for the sport as it increases avenues for sponsorships.

I am hoping this time around TATA backs their F1 sponsorship with investments in Indian Motorsport and helps the growth in the automotive segment reflect in the auto racing category. I will eagerly await their next move.