An alt-F1 blog that explores the sport and business of Formula 1 + the home of the Inside Line F1 Podcast
Kunal's F1 Blog
Skip to content
Homepage F1 Features Is This Daniel Ricciardo's New Podium Trick? 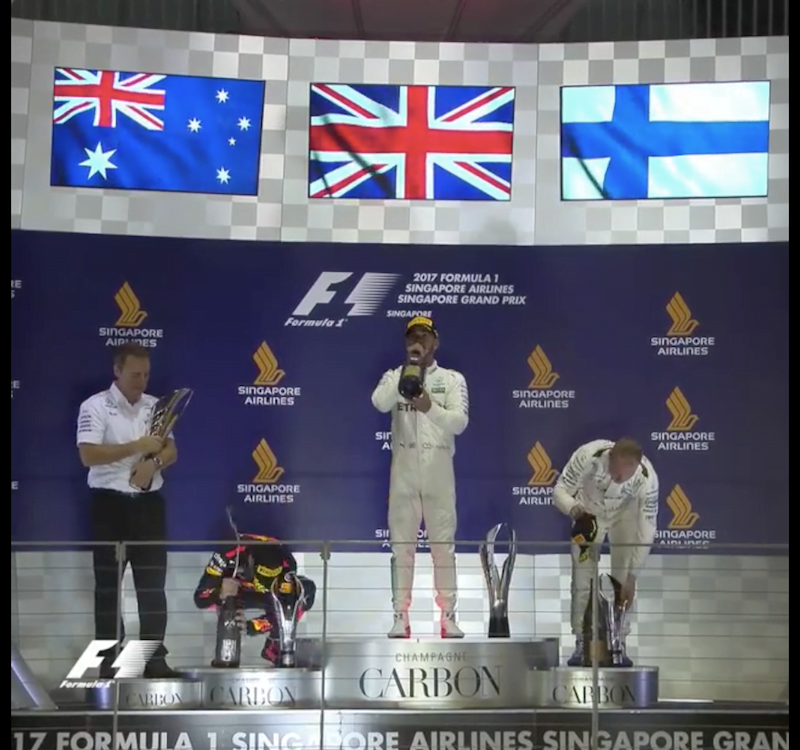 Thanks to the start-line crash at the 2017 Singapore Grand Prix and Lewis Hamilton’s surprise but dominant win, it seems that the world of Formula 1 missed celebrating Daniel Ricciardo’s new podium trick! It was only thanks to a video shared on the Soft Tyres group on Facebook (run by Ajit Devadasson) that I got to see this new trick. Since I love the shoey and what it brings out in the other drivers on the podium with Ricciardo, I hope that we haven’t seen the last of the shoey yet!
I am glad that the FIA hasn’t banned the shoey yet!

🍾 The art of champagne spraying, by @danielricciardo. All in the preparation… . #SingaporeGP #Ricciardo #F1 #Formula1 #Champagne

I’ve long said that Daniel Ricciardo is the only happy Red Bull Racing driver and his podium celebrations are a testament to it. Here’s hoping that he adds to his count of 7 podiums from this season.
Also, since we’re still talking about the race that was concluded on Sunday and about Ricciardo, here’s an interesting thought that Henrik Norem shared with me. Would Ricciardo have reacted differently, if he were in place of Verstappen? I’ll share our discussion in next week’s episode of the Inside Line F1 Podcast. In the meanwhile, you’re welcome to tune in to ‘Do We Need To Blame Anyone For The Singapore Car-nage?‘.
Co-hosted by Mithila Mehta and Kunal Shah, the Inside Line F1 Podcast is a weekly show on Formula 1 that attempts to simplify the sport and business of Formula 1. This show also aims to add some much needed humour to the otherwise serious sport of Formula 1. In 2016, the show crossed 150,000 listens and was top-rated on iTunes and Audio Boom. The show is available on Kunal’s F1 Blog and partner websites such as Motorsport, Firstpost, NDTVAuto, Sport360, Sportskeeda, Scroll, Talking About F1, Motor Octane and others.