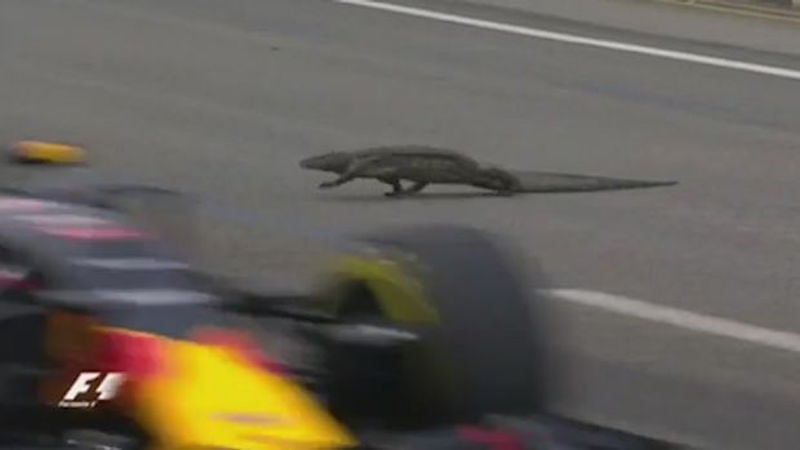 The Inside Line F1 Podcast is hosted by Mithila Mehta and Kunal Shah. This Formula One podcast offers a unique humourous view on the sport. Follow us on Facebook and on Google+. Follow on Twitter: Mithila Mehta and Kunal Shah
With Jenson Button’s help we’ve cracked the perfect idea to bring younger audiences to F1 races – install Pokemon Go monsters at every Grand Prix! Maybe they’re already working on this and decided to live test in Singapore on the perfect target audience, Max Verstappen. Yes, we are referring to the ‘Godzilla’ on track. Although, this novel idea of ours may lead to more jaywalkers on track – like the marshal in Singapore (but seriously, shouldn’t the FIA be penalised for this incident?)! After encountering the Hulk at the start of the race on Sunday, young Verstappen did have the perfect teenager of a weekend.

Nico Rosberg won in Singapore, but the race went down to the wire. In an attempt to bring Lewis Hamilton back on the podium, did Mercedes jeopardize Rosberg’s win? What if the situations were reversed? There’d be carnage!

It was also Rosberg’s 200th Formula One start – and another driver’s 300th, tune in to find out who. As the Drivers’ Championship battle continues, we’re not taking sides yet – 6 races or nearly 1/3rd of the season yet remaining. But Ferrari, what were they thinking? Or were they thinking at all? After being butted off the podium, maybe Kimi Raikkonen tipped the Singapore cops about Maurizio Arrivabene’s cigarette butt, we think.

Ferrari praised Raikkonen’s race as a ‘World Champion’ effort, but they didn’t act like a World Champion team. We’d not blame them though; it’s been nearly a decade since their last crown. While we missed Raikkonen’s uncomfortable waving on the podium and the mumbling, the Iceman did get some overtaking practice in Singapore along with some opportunity for to play his radio classics.

We thank Red Bull Racing for allowing us to enjoy the Max Verstappen vs. Daniil Kvyat battle on-track without issuing team orders. Although, we were almost certain to hear back a ‘NO’ had they instructed Kvyat to move over. In some ways, did this ‘personal’ battle help Kvyat get some closure on the unceremonious demotion? Let’s hope so. And of course, thank you to Red Bull Racing for livening up the last 14 laps of the race with a well though of tyre strategy for Daniel Ricciardo, who is increasingly becoming our choice for the ‘Driver of the Season’ and should’ve won ‘Driver of the Day’ in Singapore.

We are impressed by Niki Lauda’s humour, top marks for his comeback to Max Verstappen on their ongoing “psychiatrist” banter. A new but expected power struggle seems to be brewing in Formula 1 between Bernie Eccelstone and Chase Carey, which way will things go? Carey’s biggest short-term task will be to retain Fernando Alonso after 2017. In the meanwhile, we’re happy to enjoy some hilarious jokes at Mr. Chase Carey’s expense. Are we the first ones to do so?

NASCAR has named a race ‘Teenage Mutant Ninja Turtles,’ will Formula 1 ever get so cool? And if it ever thinks of doing so, let’s call the Singapore Grand Prix night race the ‘The Dark Night’! Finally, we congratulate Alex Zanardi, a true champion and remember one of our greatest – Keep Fighting Michael! Tune in!

PS: Like us? Tell us! We’re on Facebook, Google+ and everywhere else. Just search – Inside Line F1 Podcast!