An alt-F1 blog that explores the sport and business of Formula 1 + the home of the Inside Line F1 Podcast
Kunal's F1 Blog
Skip to content
Homepage F1 Features Ricciardo: Slow & Steady Won The Race 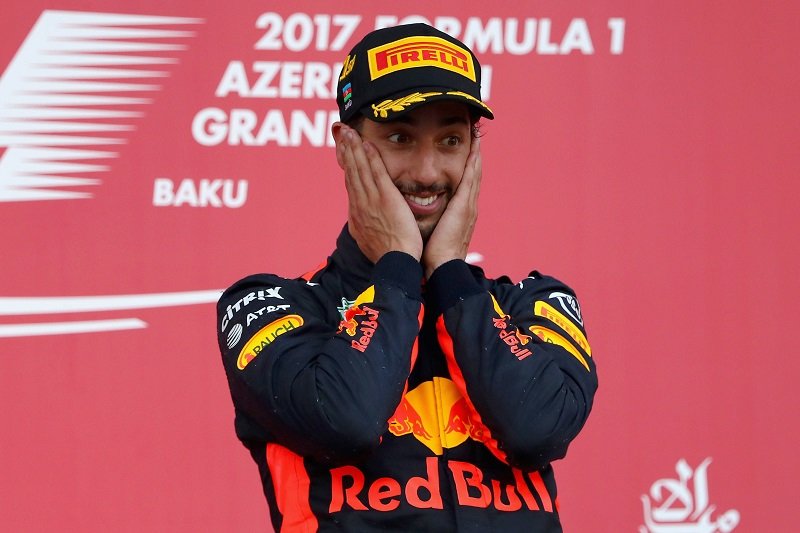 Mithila Mehta and I have partnered with Firstpost for the 2017 Formula 1 Season and will feature in their Firstpost Pole Position videos all through the season. Basically, we’re now available in text, audio and video!
‘Slow and steady wins the race’ – Daniel Ricciardo’s win at the 2017 Azerbaijan Grand Prix was the perfect example of this age-old proverb coming to life. Ricciardo, almost the 6th fastest driver (after 2 Ferrari’s, Mercedes’ and Verstappen’s Red Bull Racing car – although the RBRs topped FP1), qualified 10th after a rare shunt in qualifying. His opening laps saw him pick-up on-track debris (not his fault!) that could’ve led to brake issues – prompting Red Bull Racing to call him in for an unscheduled pit-stop; he rejoined the race in 17th place and the rest is history.
In the incident-packed race, Ricciardo managed to stay out of trouble to find himself suddenly leading the race – but not before he pulled off a brilliant tow-aided three car overtake (A Williams and both Force Indias, I think) on the main straight during one of the restarts. The below video perfectly describes Ricciardo’s race.

Ricciardo is an absolute delight on the podium, without a doubt, but Coulthard’s undoing of his shoe (to prompt a shoey) was a bit creepy! I am glad it wasn’t any other piece of his clothing.
Valtteri Bottas’s Mercedes contract for 2018 is already under much speculation – especially when Wolff said that he (Bottas) is in an uncomfortable position. After his early race mistake (where he tagged Raikkonen again), the Finn drove a remarkably good race to clinch P2 literally 100 metres from the finish line. Basis calculations, Bottas would’ve caught Stroll on the last lap, and he did. The tow worked perfectly well in Baku, thankfully!
Finally, Lewis Hamilton lost the race for the most unexpected reason – a lose headrest. The race in Azerbaijan was about a lose head and lose headrest! While fans were upset at Hamilton’s headrest, I am glad Kimi Raikkonen didn’t rejoin the race (after the red flag) without a steering wheel. That would be taking the level of difficulty of the 2017 cars to another level!
9 out of 10 Constructor’s scored points in Azerbaijan and luckily for Mclaren, they weren’t the Constructor that didn’t. There’s more in the video, do tune in.
And of course, this week’s episode of the Inside Line F1 Podcast will be released in a few hours. Subscribe to our channel on iTunes and audioBoom for your dose of Formula 1 humour.
PS: A super thanks Buz Warren for his good words on our work!