An alt-F1 blog that explores the sport and business of Formula 1 + the home of the Inside Line F1 Podcast
Kunal's F1 Blog
Skip to content
Homepage Business of Motorsport Timo Glock Extends Virgin Racing Deal By 3 Years, Will Race Till 2014 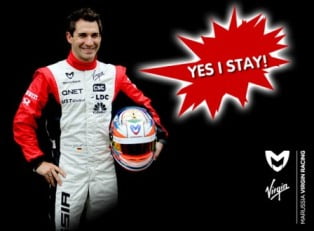 Hours before the 2011 German Grand Prix, Timo Glock announced a 3 year extension of his contract with the Marussia Virgin Racing Team. The German GP also happens to be Timo’s home GP and he will start today’s race in 19th position after a gutsy qualifying performance that saw him beat the Team Lotus racing car of Karun Chandhok. (Read: 2011 German GP Qualifying Report) Glock’s announcement doesn’t come as a surprise for the following reasons:

Glock first debuted with Jordan Grand Prix at the German Grand Prix a few years ago before moving to the Toyota F1 team. While there are positive vibes in his contract extension with Virgin Racing, I also believe that this was his only option to secure a long-term future in Formula1.