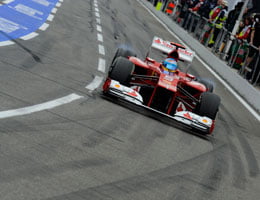 Formula1 fans witnessed yet another qualifying session where Rain God had a part to play and thankfully unlike the 2012 British Grand Prix Qualifying, there was no hold up in play. However, what came across in the German Grand Prix Qualifying session was that top talent managed to find their way to the front irrespective of the conditions and tyres, and this has been true for the entire 2012 Formula1 season.

In our Pre-German GP Formula1 Podcast, RJ Rishi Kapoor and I mentioned that Pirelli and atleast five Formula1 drivers will be debuting this weekend in Hockenheim. And while we’re still in fixation with the old Hockenheim layout, we hope tomorrow’s race will be entertaining come rain or not!

The talk leading into qualifying was of Webber, Grosjean and Rosberg all picking up grid penalties due to an unscheduled change of gearbox. I have a point of view on this which I shall share in a separate post after the GP. However, it would have been funny had Webber, Grosjean and Rosberg claimed the top 3 position in qualifying – in which case P4 would have started on pole!

Sunday’s forecast is dry weather and I would expect Mclaren and their vastly upgraded car to join the fight at the top. However, a Ferrari and Red Bull fight will be inevitable. It would be most interesting to see if the Mercedes AMG car of Schumacher will have the pace to fight for victory.

As for the mid-field teams, I am hoping Sahara Force India manage a good points score after their performance in qualifying; even more so after most of their competition is starting outside the top 10. After a wet qualifying session, teams and drivers will be allowed to start with the tyre compound of their choice and it will be interesting to see tyre choices on the starting grid tomorrow. Indications are that tomorrow’s race is going to be an absolute stunner, so do tune in!