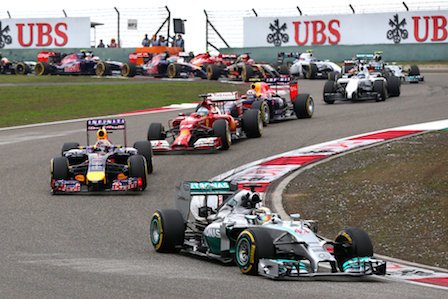 First, it was Ferrari, followed by Red Bull Racing and now it seems to be the era of domination for Mercedes. Whether the domination is boring or not, depends on where your loyalties lie. For me, they lie with the other Mercedes of Nico Rosberg. So like I said before, I now feel what it is like to have your not so favourite driver dominate.

But I take nothing away from Lewis Hamilton, his talent and his hat-trick of wins. He is doing what Michael Schumacher and Sebastian Vettel did in their days – make the most of his machinery, which is a class apart from the rest yet. And after having beaten Schumacher as his team-mate for three years, Rosberg possibly has found his most uphill Formula1 battle yet. The 2014 Formula1 Season is only going to get more interesting and we are yet to see Red Bull, Ferrari and Mclaren intensify the battles.

In the latest episode of the Inside Line F1 Podcast, we discuss a whole host of topics ranging from Mercedes and Hamilton’s domination, Ferrari and Red Bull Racing playing catchup, Mclaren losing ground and Sahara Force India being the best of the Mercedes customer teams. Here’s what’s in store in our Formula1 Podcast:

The 2014 Spanish Grand Prix is three weeks away and in the next episode of the Inside Line F1 Podcast, we introduce a new feature on our show called ‘Know Thy Racer’ where we will speak to upcoming motorsport talent from India and other countries.

The first driver on our show is Chennai lad Aditya Patel who can safely be labeled as India’s best tin-top racer. Do tune in next week to hear about Aditya’s progress in the field of motorsport, plans for 2014 and views on the 2014 F1 season.

And if you believe that you need to be featured and your racing talent needs to be spoken about to our audiences, feel free to drop us a mail (or a comment in the section below!). Till then, keep listening, keep racing!