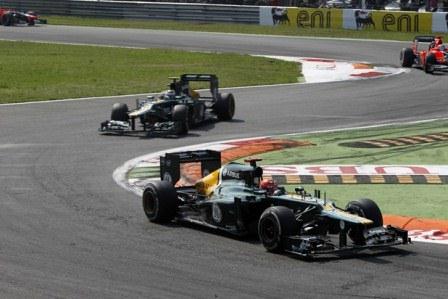 RJ Rishi Kapoor was upto antics yet again while recording our latest Formula1 podcast. This time he had me participate in them too (of course!)! And also, our man was off to Sri Lanka to catch a certain cricket match. I bet he’d now do anything to get tickets to the 2012 Indian Grand Prix. Which reminds me – have you bought your tickets? Do read ‘Indian Grand Prix – Which Stand Is The Best? ‘.

And back to our pre-Japanese GP podcast, here’s what we went talking:

Suzuka has witnessed many an epic Formula1 battles. This week we anticipate a Red Bull vs Mclaren fight yet again and as Rishi put it, Alonso’s cemented 3rd place in the podium. But I feel that he will need much more than that if he wishes to keep his advantage in the title fight.

As for the mid-field teams, Sauber are facing a tough challenge from Sahara Force India and will Williams’ ‘Crash’analdo crash this race too? Help me pick a corner where you most likely think he will!

And read ‘Narain Karthikeyan To Drive For WilliamsF1 In 2013’.