An alt-F1 blog that explores the sport and business of Formula 1 + the home of the Inside Line F1 Podcast
Kunal's F1 Blog
Skip to content
Homepage Drivers Bruno Senna Renault’s Dilemma: Bruno Senna or Nick Heidfeld? 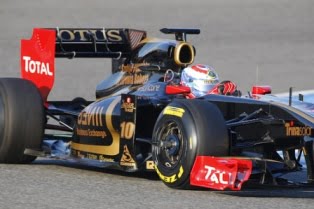 Social media is a great tool for communication. Minutes after Robert Kubica’s crash last weekend, the entire online motorsport fraternity was out showing their support to Kubica. That Kubica’s injury could be career threatening is known to all, but his recovery period is not. What is certain is that he will sit out half of the 2011 season, if not all of it. Renault have put up a brave front post Kubica’s crash. They know that 2011 could well be their year of glory after securing fresh sponsorship and a new management to direct the team forward. The team also had two stable drivers entering their second season with the team, one of them being the most revered driver in the pitlane. Renault’s management has come out in full support of Kubica’s decision to go rallying. They are hopeful of a quick recovery, but also know that they will need to think of their team’s immediate future. While their heart is with Kubica and his recovery, their minds are already on ‘who will replace Robert’!

There have been many names doing the rounds. Some are pretty obvious and the others are being discussed just to add to the number of options for the team. Here is criterion that I think Renault will be looking at before selecting Kubica’s replacement.

The list of drivers whose name have cropped up in the last few days are Nico Hulkenberg, Nick Heidfeld, Pedro de la Rosa, Bruno Senna, Vitantonio Liuzzi, Karun Chandhok – drivers who drove in 2010 and are without a racing seat in 2011. There were names of a few contracted drivers that were being discussed, but I think too many people will have to jump seats to make that happen.

Renault’s press release agreed stated that Bruno Senna and Nick Heidfeld were being assessed as Kubica’s potential replacements and that they would be testing the car in Jerez.

Bruno Senna seems like the most obvious choice. But his obviousness is less because of his talent and more because of his contract as Lotus Renault GP’s third and reserve driver. He was announced as their 3rd driver during the launch and ‘most equipped’ to jump into a race seat should the need arise. However, Senna still has to prove himself in the pitlane as consistent performer and more importantly a team-leader. Having two rookie drivers would well be suicidal for Renault. Conversely, giving Senna a drive would be good for two reasons. 1) A Senna name in the black and gold livery would make work easy for the marketing team and 2) investing in the future of the team – could they groom Senna to be their lead driver?

Nick Heidfeld is the other candidate that has been named. The veteran F1 racer has been struggling to find a seat in Formula1 since last season and the reason is more financial than talent. (Yes, there are too many pay drivers around on the grid!) He is known for his ability to develop race cars and have performed consistently in the past. Nick Heidfeld led the BMW Motorsport team in their 2007 and 2008 campaigns. The added advantage about Nick is that he played test driver for Pirelli in the off-season. His strength could be that he understands the Pirelli tyre better than any other driver on the grid and could well be a start-of-season advantage for the team.

Nick sounds charged about this opportunity that has come his way and I think the Renault seat is for him to lose!

There were a host of other drivers suggested by various mediums: my opinions are below for you to read.

Nico Hulkenberg, Force India’s 3rd driver too seems like a good choice. He picked up pace against his William’s team-mate Rubens Barrichello towards the end of the 2010 season and was left without a contract extension with the team purely due to financial reasons. Nico’s move to Lotus Renault GP would totally depend on his contractual terms with Force India. Contractual obligations aside, a move to Renault could well be the break that Nico would be looking for. I do suspect some action to make Nico jump ship by his manager Willi Weber.

Vitantonio Liuzzi was left without a race seat this year after Force India decided to promote Paul di Resta to a racing seat in 2011. Liuzzi is known to be a quick driver in the F1 paddock, but was found wanting for pace most of 2010. His consistency hit an all-time low last season and that might just work against him when Renault sits to tick boxes against Liuzzi’s name. While his leadership skills haven’t been tested yet in Formula1, his earlier role of playing test driver might come handy for Renault’s development program.

The picture is still hazy regarding Kubica’s replacement and the last name doing the rounds is of Kimi Raikkonen. Lotus Renault GP attempted to lure him back to Formula1 last season, but were unsuccessful in their efforts. Raikkonen’s return would mean that the 2011 F1 grid would have 6 World Champions on the grid, something that would interest Bernie as well. I think that fans would love it too.

The better part about Renault’s offer to Kimi would be that this could only be a one-year deal and if Kimi wasn’t pleased enough, he could choose to leave – should Kubica be able to make a return to the sport. As exciting as Kimi’s return may sound and as much as everyone in Formula1 would want to see him return, it will always be about ‘Would Kimi want to’.