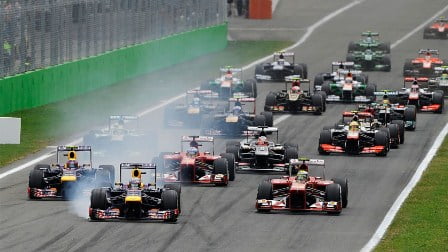 Hours after Vettel’s triumph in the 2013 Italian Grand Prix, media and fans (primarily via social media) went abuzz about Ferrari’s much rumoured and much discussed 2014 driver line-up. The conversations around this topic stole the thunder from Vettel’s near-perfect race that ultimately saw him win pole-to-flag in astute fashion.

And while one thought the speculation was about Massa’s replacement, the rumours mills indicate that either one or even both drivers could be replaced by the Scuderia.

Shocking? Well, not really if one has been following developments in the Ferrari camp in the last 4-6 weeks. Alonso, Massa, Raikkonen and Hulkenberg are the drivers playing musical chairs (or cockpits, if you may like) and in this week’s episode of the Inside Line F1 Podcast, we try and assess various permutations and combinations and of course try and figure who could be the biggest gainer and loser!

Here’s what’s in store for you in our latest Formula1 podcast: (YouTube channel: http://youtu.be/RLKhTCNJIyw)

By the time we are back next week, a new Ferrari driver will be announced and the anticipation is much like the new Pope being crowned by the Vatican! But the one line-up that will remain unchanged for the 2014 Formula1 Season is the line-up on the Inside Line F1 Podcast, keep tuning in!

Earlier posts and podcasts related to the recent drivers movements: