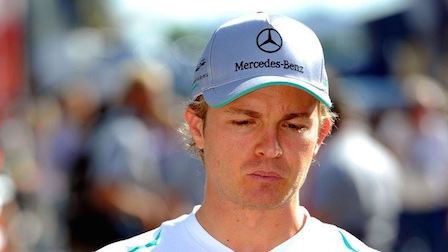 Nico Rosberg has been a revelation for me this season. I doubt many Formula1 fans would’ve bet in favour of Nico Rosberg leading the championship table let alone beating his illustrious and World Champion team mate Lewis Hamilton. He has been quick, competitive, shrewd and very calculative in his approach, something that I don’t think many fans could sit back and take notice in the previous seasons when he was in uncompetitive machinery. One can see that his steely approach has caught the Mercedes management by surprise and Hamilton too! (Read: Mercedes Prefer A Blonde On Top)

I think the Rosberg – Hamilton has been a fair contest with a little give and take from both sides of the garage, although Hamilton has suffered a tad bit more when it comes to reliability issues. Is it a car issue or is it his driving of a fragile car the issue, I am not equipped to comment. (Read: A Nico And A Nico-le for Lewis)

But Formula1 is a weird sport, and this isn’t because the cars have wings and go round and round on a piece of well painted tarmac. It is because of the fans, well some of them at least. The ones that go around ‘boo’-ing drivers, World Champion or not.

If the botched overtaking manoeuvre in Spa is the reason, I think the Mercedes management and Hamilton have already overreacted to it, so the fans can let him be and I hope better sense will prevail in Singapore.

In this week’s episode of the Inside Line F1 Podcast, we bid goodbye and thank you to Luca di Montezemolo, possibly one of the biggest names in the sport, who was asked to step down by the Fiat Group due to repeated failures by Ferrari to win in Formula1. Strange that it was the team’s failure on track and not in the board room (for their road car sales figures) that led to his sacking! We discuss two jobs that Luca could land up with!

The FIA has decided to make the sport even more interesting by banning radio messages starting this weekend’s race. Any message that aids the performance of the car or the driver has been done away with. While many believe it puts more onus on the driver, I think the decision is unwise.

With Mexico confirmed for the 2015 Formula1 Season, we go back to a 20 race calendar! A time to rejoice for fans! And if it is planned further well, we could actually have 52 racing weekends every year! But can we also explore the three cars per team option? (Read: F1 Should Have Three Car Teams)

And lastly, Formula E’s inaugural e-prix in Beijing was concluded over the weekend. We talk about the new age series, their debut race and if this race can indeed be a threat to Formula1 in the medium to long term future. (Read: Has F1 Given Formula E A Chance?)